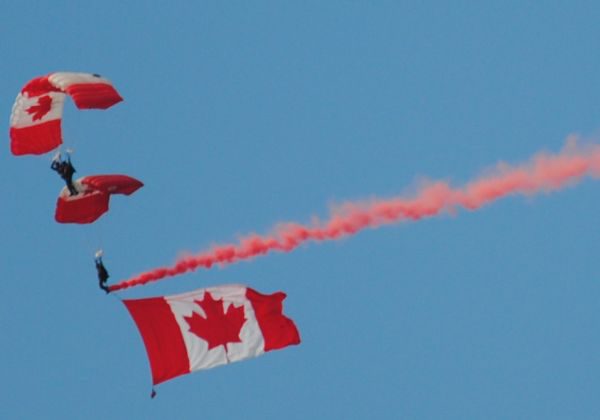 The SkyHawks perform in this photo from June 2017. Photo by Stu Campaigne, Moose FM

Weather could play a factor with Armed Forces Day 2018, which is scheduled to feature a daytime and twilight show and take place today at the North Bay Waterfront.

We will keep you posted on Moose FM, MyNorthBayNow.com and Facebook with updates on the weather forecast and how today’s events could be affected.

Leah Pierce, public affairs officer for 22 Wing says the organizers of this year’s Armed Forces Day are closely monitoring the weather forecast and the public shall be advised of any changes.

The daytime show from 10:30am to 2:00pm will offer air demonstrations by the CF-18 Demo Team and the SkyHawks. There will also be ground displays including army vehicles, a CF-18 cockpit and equipment and musical entertainment by the North Bay Tri-Service Cadet Band. Attendees will be mostly school-aged children.

The twilight show from 6:00pm to 8:30pm will offer another opportunity for military members, military families and community members to take part in the activities. There will be a second demonstration by both teams, as well as ground displays and the following musical lineup will provide entertainment: 22 Wing Concert Band, Royal Canadian Legion Branch 23 Pipes and Drums, 547 ‘Canuck’ Royal Canadian Air Cadet Squadron marching band and the North Bay Military Wives Choir.

Armed Forces Day 2018 will pay tribute to NORAD’s 60th Anniversary with a focus on the role of 22 Wing/Canadian Forces Base (CFB) North Bay.

Air demonstrations by Royal Canadian Air Force (RCAF) aircraft are carefully planned and closely controlled to ensure public safety at all times. As safety is paramount to the SkyHawks, the team will always operate within safe guidelines to perform the best show possible. For the event, the area is considered a “No drone zone.”