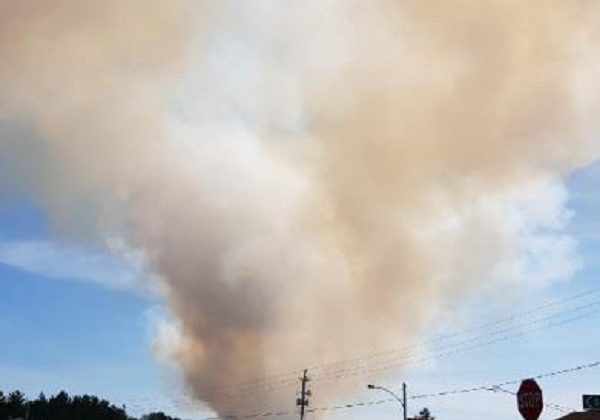 Although no roads are officially closed yet, the OPP is asking motorists not to use Highway 11 between North Bay and Temiskaming Shores.

A forest fire near Temagami has resulted in an evacuation order and Highway 11 could be closed if the forest fire situation gets worse.

Those who live between Finlayson Point Provincial Park and Jessie Lake were forced from their homes just before 6:00pm on Sunday.

In addition, residents between Jessie Lake and the Lake Temagami Access Road are being told they may have to evacuate if the forest fire worsens while Temagami residents face a voluntary evacuation.

All homeowners are being directed north on Highway 11.

Sunday at approximately 5:45pm, members of the Temiskaming Detachment of the OPP assisted the Ministry of Natural Resources and Forestry (MNRF) by advising residents living between Finlayson Point Provincial Park Road and Jessie Lake to evacuate their homes due to a dangerously close active forest fire near Temagami, Ontario. The MNRF has implemented this mandatory evacuation and there are approximately 20 homes in this area.

Members of the public have been asked to leave their residence immediately and travel northbound on Highway 11, away from the active fires.

Residents living in the area between Jessie Lake and the Lake Temagami Access Road have been placed on, “alert” suggesting that they may be asked to evacuate should fire conditions in their area worsen.

Those residents residing in the Town of Temagami are currently on a voluntary notice to evacuate and are also being asked to travel northbound on Highway 11 if they choose to leave at this time.

Assisting with the operations is the Temagami Fire Department. There are currently no road closures which will allow residents time to travel, however; it is anticipated that fire conditions may worsen and as such Highway 11 may be closed at a later time.