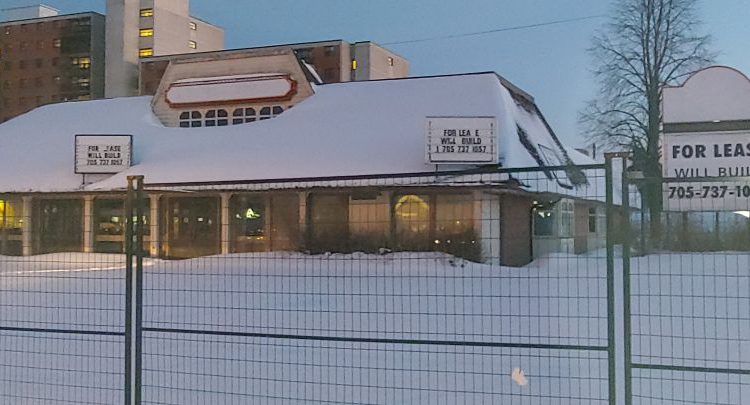 This former site of Mother's Pizza, a country bar and a bingo hall will be torn down and a Jiffy Lube will replace it. Photo by Stu Campaigne, Moose FM

As the discussion about the location of a new arena development ramps up once again at City Hall, one proposal in West Ferris will likely be benched.

“I feel it was a missed opportunity,” says Jamie Lowery, who was deeply involved in a group planning to bring a twin-pad arena to the North Bay Mall.

Lowery says last week’s announcement the former Mother’s Pizza and bingo hall structure located in the southwest corner of the mall parking lot would be demolished and replaced with a new Jiffy Lube “certainly isn’t a surprise as this has been in the works for quite some time.”

“The discussions held with the representative of the mall owner involved possible locations to accommodate both the arena and the business,” says Lowery, “however, now that the site has been chosen for Jiffy Lube, it certainly limits the options and…I would suggest that the arena proposal is all but dead.”

The group backing the private sector plan to bring a twin-pad arena nearby to where the current West Ferris Community Centre sits felt it could make a natural replacement for the rink and community amenities contained within the building on Gertrude Street that will soon be decommissioned. Besides the ice rinks, the proposal for the North Bay Mall site included daycare spaces, programming for seniors, and employment services for youth.

Lowery, who is the CEO of Cassellholme but previously served as a municipal city planner in southern Ontario says “I think the City missed the boat on this one.”

In July 2018, Lowery presented to City Council on behalf of the mall arena consortium, expressing interest in a partnership with the City of North Bay in a plan to redevelop the North Bay Mall and build a twin-pad arena and the other amenities. Lowery’s years of experience in urban planning has led him to believe building a single-use facility like a hockey arena is not in the best interests of the community.

“I still think it would have been a great solution for the community and some of our preliminary work indicated that it would have added significant value for businesses, boosted tourism potential and added to West Ferris.”