The Ministry of Natural Resources and Forestry – North Bay District says it is closely monitoring the weather and developing watershed conditions and further updates will be issued as appropriate.

For now, the MNRF is advising area residents an updated Flood Warning is in effect until next Monday.

The current forecast for the North Bay MNRF District is showing rain, snow and or ice pellets for today. Daytime temperature highs are expected to range from 1 C to 10 C for the next couple of days. Overnight temperatures are forecast to hover around zero degrees and slightly below zero in the northern reaches of the district.

Most of the lower portions of northeastern Ontario have received substantial precipitation over the last week. The combination of repeated rainfall and snowmelt has resulted in water levels and stream flows across the area rising significantly, reaching or exceeding flood stage in many areas.

The MNRF warns precipitation in the forecast will maintain or further add to existing high water conditions across most of the North Bay District. 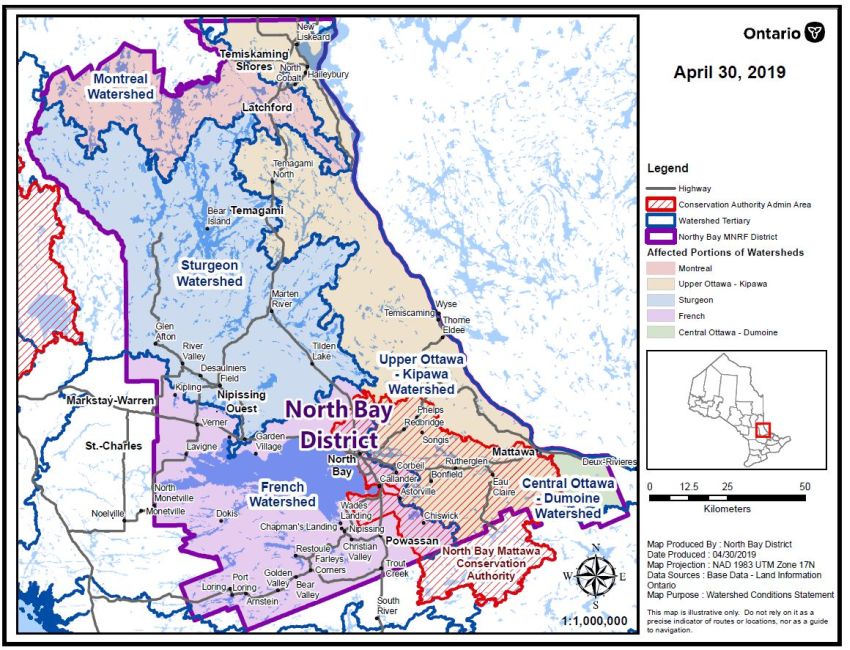 Road closures and sandbagging have been reported and area residents have been impacted by flooding. Localized flooding has been reported on much of the southern portion of the District, which includes the Tomiko River, Sturgeon River, Upper French River, Mattawa River, Pickerel River, Wolf River, Restoule River, South River as well as creeks and streams that flow into sections of these respective watersheds.

Shorelines and banks adjacent to rivers and creeks are very slippery and unstable at this time and, when combined with cold open water, pose a serious hazard. Lake Nipissing water levels are increasing and are expected to reach the Maximum ‘Non-Damage’ Water Level of 196.22 on the lake by Friday. There is the possibility that water levels on the lake will exceed that mark into the weekend.

In the northern reaches of the district which includes the Matabitchuan River and Montreal River watersheds, increased flows and water levels have been reported.

Continued melting of the snow pack coupled with forecasted precipitation and water/reservoir management will contribute to increased runoff and the potential for localized flooding.

The MNRF adds a close watch on local forecasts and conditions is recommended.