West Nipissing Mayor Joanne Savage has declared a state of emergency as water continues to rise in the municipality.

Declaring a state of emergency allows the municipality to get help and deploy more services.

A number of roads in West Nipissing are now underwater or at risk of being washed out and some homeowners may have to evacuate.

The evacuation impacts residents in low-lying areas and emergency officials will be visiting people in this group to tell them of their options.

West Nipissing Police Chief Ray St. Pierre says if it becomes unsafe to remain in your home, you should consider leaving.

St. Pierre says that’s because, in the event of an emergency, emergency vehicles might not be able to reach anyone still on their property.

St. Pierre says the municipality is preparing a list of roads that are closed and will release that information shortly.

One of those roads is the route to Minnehaha  Bay.

In the meantime, the municipality continues to provide 100 sandbags per home to homeowners so they can protect their property.

Municipal officials are again emphasizing the sandbags are intended to protect your home and are not to be used on a secondary structure or shoreline.

The bags are available around the clock at the Sturgeon Falls Fire Station at 22 Holditch Street and on Friday at the Lavigne Fire Station from 9:00am to 4:30pm.

Additionally, the municipality has sand piles for people who want to make their own bags.

It’s asking people who can help to call 753-2250 or send an email to [email protected] with your name, phone number and email address.

And while residents of West Nipissing deal with a state of emergency and possible evacuation, their neighbours to the east along Jocko Point Road are being flooded. 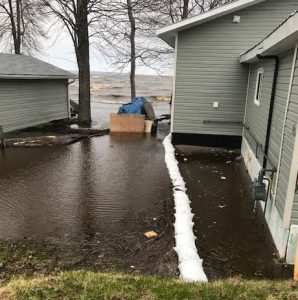 The impact rising water is having along the 1400 to 1700 block of Jocko Point Road. Photo credit: Herb Edmunds

A section of the roadway covering the 1400 to 1700 block area has been overrun with water.

At this point, there is no evacuation order.

The Jocko Point Fire Hall is handing out sandbags and the Nipissing First Nation says each home will be given a maximum of 300 bags per lot.

The need for additional bags will be based on an on-site inspection.

They are near the pow wow grounds and fire station.

People are asked to take only what they need.