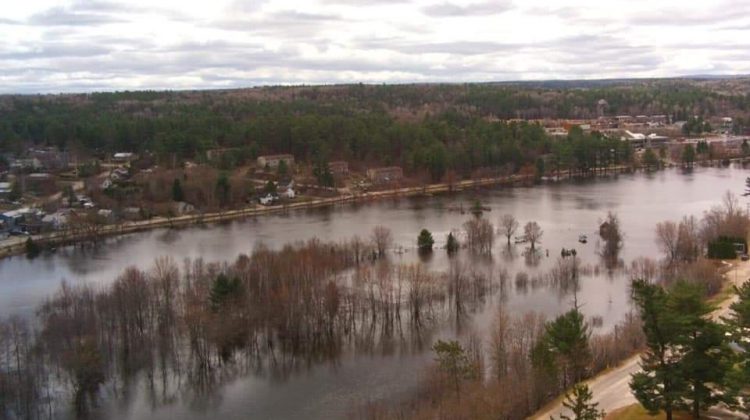 An aerial view on May 7, 2019, courtesy of the OPP's Unmanned Aerial System, during the early days of the flooding in and around Mattawa. (Supplied by OPP, Twitter)

The North Bay-Mattawa Conservation Authority says substantial precipitation is forecast over the next week, prompting the organization to update and extend its Flood Warning to next Wednesday.

The NBMCA reports the Ottawa River remains “extremely high at Mattawa.” Rainfall is forecasted Saturday through Monday and a total of 40 millimetres could fall over the next five days. Highs will range from 10 to 15 C with lows of 2 to 10 C. A southwest wind is forecasted at 27 km/h for Monday, with wind gusting at times.

“The current forecast water level for the Ottawa River at the Town of Mattawa is 155.50 metres (above sea level) today, which is approximately 18 centimetres (7 inches) above its level this morning,” said Kurtis Romanchuk, NBMCA Duty Officer. “However, it’s also expected that this forecast will change as a result of continued snow melt and the forecast rain.”

The Town of Mattawa reports that sand and bags are available at the municipal public works garage at 1276 Mills Street. Volunteer assistance is welcome. Boat traffic on the Mattawa River is now restricted below the Hurdman Dam to protect the shoreline and properties from wave damage.