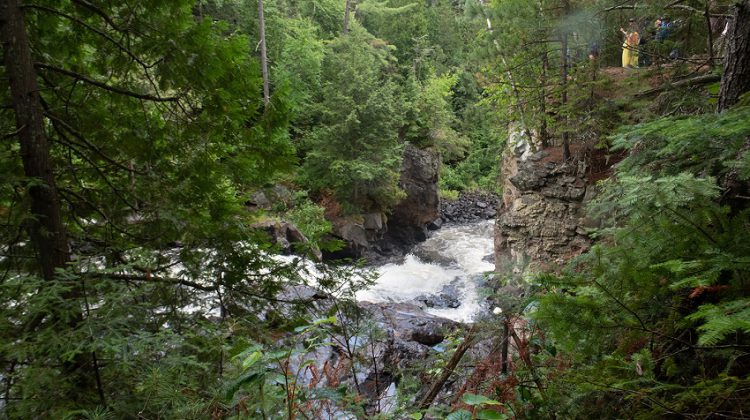 The Eau Claire Gorge is open for another season.

The North Bay-Mattawa Conservation Authority opened the popular rapids and waterfalls site on Thursday after a field crew walked the trail and give it the all clear.

Sue Buckle, the NBMCA’s Manager, Communications and Outreach, says the main gate to the trail is opened as are the washrooms.

However, Buckle says a portion of the trail is closed because of flooding caused by the high water level.

“But signs are posted so people can reroute,” Buckle said.

The weekend is also calling for some rain and Buckle suggests people wear proper footwear if going to the gorge over the long weekend.

“When things are a little wet, the trail can be slippery,” she said.

“So we ask people to use caution on the trails and keep kids back from the edge of the lookout to the gorge.”

With the spring water so high, the rapids will be moving very fast this time of year and Buckle says visitors will be able to hear the sounds of the water well before they reach the site.

Buckle also says although some bugs are out, they’re not biting just yet so they won’t be a nuisance this weekend compared to when temperatures warm up later this spring.

To get to the Eau Clair Gorge, take Highway 17 east and turn onto Highway 630 several kilometres before Mattawa and then follow the signs in.

Buckle said the Conservation Authority has also listed a number of sites that are affected because of flood conditions.

To see what they are she says go to www.nbmca.ca and click the Important Service Disruption button on the homepage for a status of the various sites.