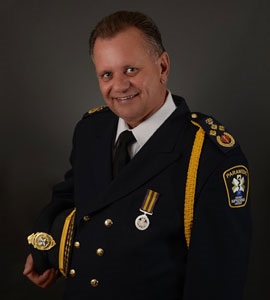 Jean Guy Belzile, Chief of EMS under DNSSAB is retiring (Supplied by DNSSAB)

The day is Belzile’s last day on the job as he retires after 19 years of service.

Belzile has seen many changes over nearly two decades with how land ambulance services are delivered and funded.

The paramedics fall under the Nipissing DSSAB and its CEO, Joe Bradbury, says Belzile’s hard-working approach and diligence will be missed.

Mark King, the chair of DSSAB says the agency has valued Belzile’s contribution over the years.

King says “one can’t put a value on the importance of having well-trained and efficient response teams in the event of emergencies”.

King said every member of the board will miss Belzile greatly.

Over the years Belzile made sure the paramedics had modern equipment for their daily work.

A former paramedic himself, Belzile worked with volunteers to ensure they were properly trained and recognized for their work in Emergency First Response Teams.

It’s these volunteers who help out in rural areas until paramedics could arrive on the scene and take over.

Belzile oversaw changes in EMS during his years of service.

Among his accomplishments was the installation of Automatic External Defibrillators in public places throughout Nipissing District.

He helped bring the paramedicine program into Nipissing, enhanced service in Algonquin Park and Belzile also got support for the new EMS station in North Bay.

Other accomplishments include 24-hour service for West Nipissing.

The now retiring Chief of EMS also organized an annual symposium for the past 17 years to help paramedic providers and mechanics stay current with new developments.

As Belzile starts to wind down his paramedic career, he says it’s been a privilege to serve and that his contributions helped enhance services in Nipissing District.