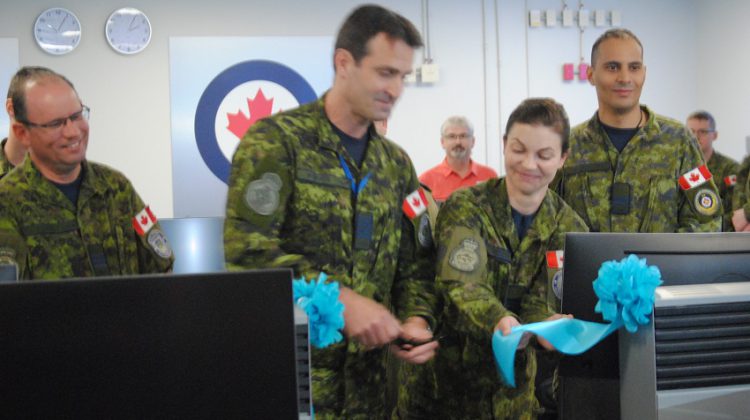 A new facility has opened at CFB North Bay to give personnel battle skills.

The Mission Training Centre is a room in the Sergeant David L. Pitcher Building that’s equipped with the latest technology that puts personnel through a series of attack simulations.

“This is next level simulation software, said Major Brenda Tinsley.

“It’s completely contained away from the live world operation where we can alter all the parameters.  I can make inside the simulation anything that I want happen.”

With the MTC now at 22 Wing, it means the base no longer has to send its personnel to Europe or the United States for this kind of training.

Tinsley says the MTC can house up to 25 personnel for training purposes.

The number of “students” varies depending on the type of program being taught at the time and the training length can range from as little as four weeks to five-and-a-half months. 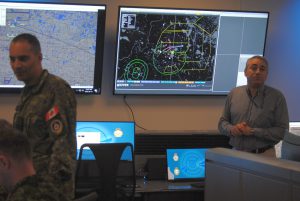 Part of what the simulators look like in the MTC at 22 Wing. (Rocco Frangione, MyNorthBayNow.com staff)

The facility is located in the former Nav Canada site.

After the space became available, the MTC idea took hold and the entire program took two years to become a reality.

Tinsley says the idea was pitched to Colonel Mark Roberts, the base commander and then to more leadership which liked what it heard and the final stage was the financial backing.

Roberts says the equipment and software in the MTC cost about $1 million.

He says with it now in place, 22 Wing can “participate in a greater scope of NORAD training with our American partners”.

“This is about innovation, about transforming the way we think and train to meet those new and current threats.” 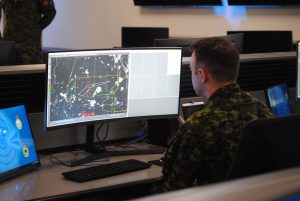 Another section of the MTC simulator. (Rocco Frangione, MyNorthBayNow.com staff)

Tinsley says although the simulation concept isn’t new, the MTC at CFB North Bay is the first of its kind in Canada.