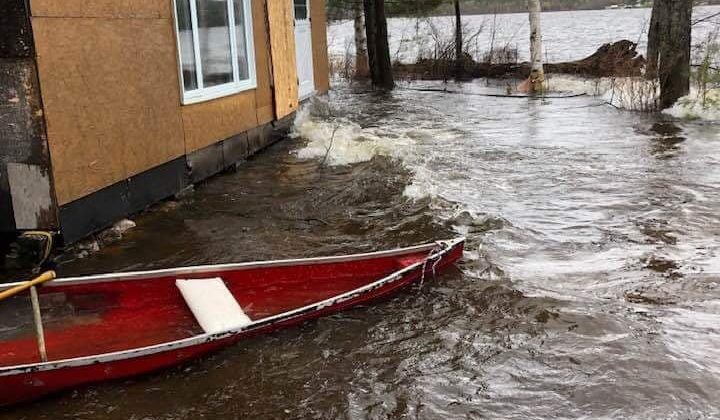 Boat wakes and waves caused issues at this cottage on Lake Nipissing earlier this spring. (Supplied by Dave Walton)

Recent rainfall and rain in the forecast has seen the flood warning for the North Bay and Callander shoreline of Lake Nipissing extended to Tuesday.

Water levels on Lake Nipissing remain high after spiking due to the widespread rainfall, prompting the extension by the North Bay-Mattawa Conservation Authority.

“Although we experienced 20-25 millimetres of rainfall and a spike in lake levels, the good news is there is very little rain in the forecast beyond Sunday and inflows are expected to drop back down over the weekend,” said NBMCA Duty Officer Kurtis Romanchuk.

By tomorrow, at least another 5-15 mm of rain is expected. No significantly strong wind speeds are in the next five-day forecast. Lake levels may continue to drop 1-2 centimetres per day on average over the next several days but that will ultimately depend on the rate of evaporation and the actual amount of rain.  Wind speed and direction continue to be a major factor in local water levels and Lake Nipissing levels remain vulnerable to any significant precipitation events and strong winds.

Lake Nipissing is currently at an average elevation of 196.31m (metres above sea level), rising approximately 4 cm over the last 24 hours, due to the precipitation. However, this is still considered high and the water level remains vulnerable to wind and rain effects. In North Bay, the local level reads 196.35m and at the French River outlet on the lake, the gauge reads 196.27m. The outflow from the dams along the French River is being reassessed on a continuous basis to balance flooding on Lake Nipissing and the French River.

Meanwhile, the Ottawa River at the Town of Mattawa is currently at elevation 153.59m (metres above sea level) and has risen substantially in the last few days due to the recent rainfall but remains far below its peak of 155.64m earlier this spring. Reservoirs and dams upstream may make adjustments in response to significant rainfall, which has an effect on water levels downstream.

A Watershed Conditions Statement – Water Safety remains in effect for the Mattawa River, and other watercourses in NBMCA’s jurisdiction due to high water levels.

Toronto and Peel hotspots for COVID-19