In the aftermath of a landing in close proximity to spectators at last week’s Armed Forces Day, the military is taking action (see attached video submitted by spectator Machaela Souliere-Boucher).

At Wednesday’s daytime performance a member of the SkyHawks parachute team missed his landing spot on Marathon Beach and careened into King’s Landing where hundreds were watching the performance. 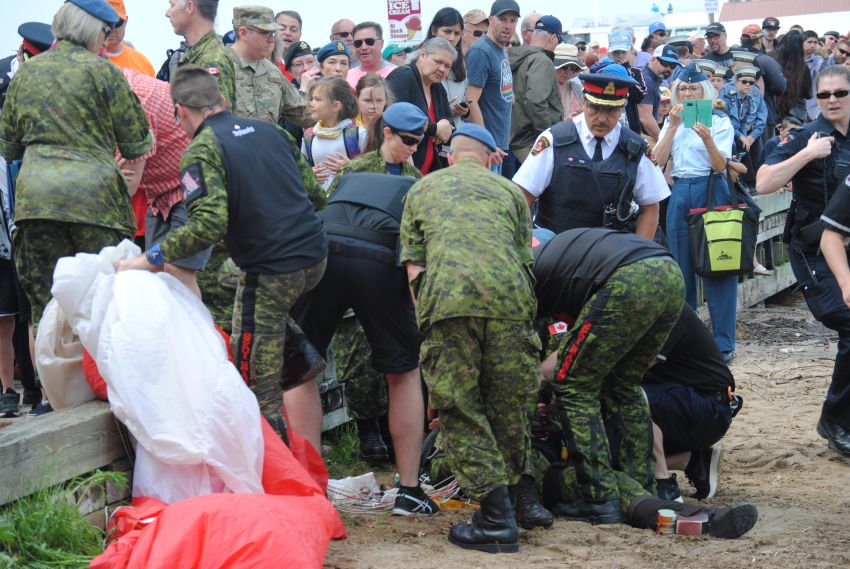 The crowd had no escape route as a parachutist narrowly avoided colliding with spectators watching the aerial performances from King’s Landing on Armed Force Day. (Stu Campaigne, MyNorthBayNow.com staff)

The SkyHawks’ Public Affairs Officer, Captain Derek Reid said, “In the case of our performance in North Bay, we were relieved that no injuries were sustained by spectators nor our teammate, but we still take the situation very seriously.

“While challenging, the landing area at Marathon Beach is within the capabilities of SkyHawks members. A decision making assessment and debrief have already been conducted as a team and these lessons will be carried forward to future performances.”

Armed Forces Day Committee Chairperson Major Scott Bailey says he will be meeting with the committee to review best practices and lessons learned, which will include a review of safety protocols.

“Our first concerns are to the health and safety of the public, and that of the members of the demonstration teams,” said Bailey. “We work very closely with the visiting teams to ensure the welfare of the members of the North Bay community and surrounding areas, so everyone enjoys the Armed Forces Day festivities.”

Said the SkyHawks’ Reid, “The inherent risk of parachuting is part of what makes our show exciting, so we train extensively to conduct our performances as safely as possible. The team conducts a review after each and every jump in order to learn and improve.”