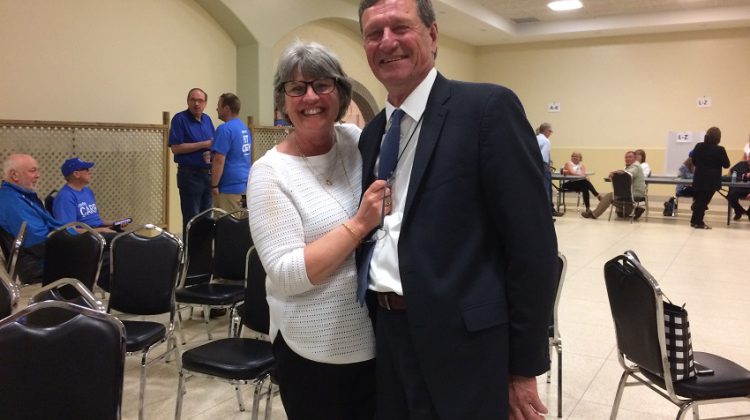 North Bay city councillor Mark King has been chosen to represent the Conservative Party in Nipissing-Timiskaming in the October 21st federal election.

Tory riding association officials did not release the margin of victory but did say a couple of hundred people cast ballots.

Following the win, King addressed what remained of the crowd at the Davedi Club.

He admitted to Carr that he was a bit nervous walking into the building Monday evening when he saw so many people sporting blue Carr T-shirts.

He said the Carr team worked hard on her behalf and needed to be congratulated.

On election issues, King says he has no problems with riding incumbent Liberal MP Anthony Rota.

“The general perception of Anthony is he’s a nice fellow and I know him personally,” King said.

However, King says the federal government has done little for the riding and has a theory on why.

An example of the feds not coming through for North Bay is the crosswind runway issue at Jack Garland Airport.

“Anthony has indicated it doesn’t come under federal jurisdiction as far as funding is concerned,” King said.

“It’s been left to North Bay taxpayers to pay for this when it should be a federal cost.”

King also had something to say about the immigration pilot project announced Monday to bring skilled immigrants to Canada to fill jobs employers are having a hard time filling with Canadians.

King is worried about who foots the bill when the immigrants arrive.

“Someone will have to pick up the tab for this,” he said.

“It’s fine if these people are trained and they move into jobs that are not filled by existing Canadians.   But if the federal government thinks that the municipalities and provincial government are going to foot the bill for immigrants, I’d be very surprised if it happens.”

King says his comments on the pilot program should not be construed as racist.

He says the pilot project was actually discussed at DSSAB last year and the agency decided not to move on it unless it knew beforehand that the federal government was prepared to pay the bill.

King says something he doesn’t understand is why there’s a push to bring in skilled immigrants when there are many First Nation people who can also be trained.

He says the Indigenous population is one of the fast growing sectors and asks why the feds aren’t involved in spending more time to train people already living in Canada.

He says the tax makes no sense at all and was only put in place to generate revenue for the federal Liberal government.

But because of the tax, King says Northern Ontario residents are suffering because we drive long distances and need fuel and during the winters we pay a premium to live in our homes because the carbon tax is also applied to our heating costs.

King also supports the concept of a two for one highway for Highway 11 North.

Residents in the New Liskeard region, which is also part of the riding, have been pushing the concept to stop collisions on the highway.

The concept involves turning Highway 11 North into three lanes where one of the lanes is a continuous passing lane and who can use the passing lane alternates for north and southbound traffic.

“You are four times more likely to be killed on Highway 11 than any other highway in Northern Ontario,” he said.

“We need to figure out how to fix this problem.”

Although he’s not legally required to do so, King plans to take a leave of absence from city council once the election is officially underway this fall.

And although the official start of the election is about three months away, King says his unofficial campaigning starts Tuesday.