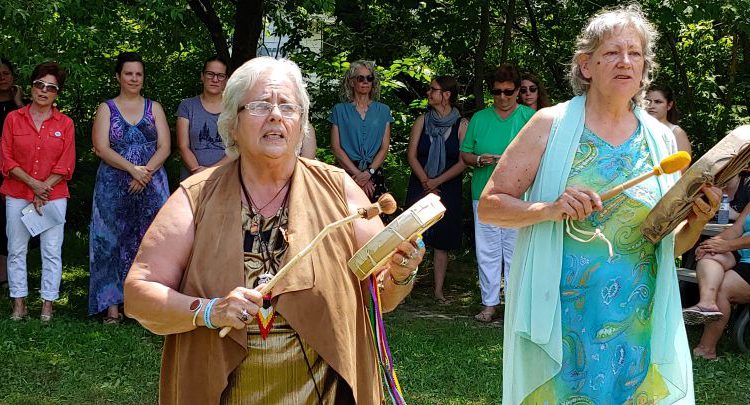 Drumming and singing at the unveiling of a pebble mosaic in honour of survivors of sexual violence with staff and supporters of Amelia Rising Sexual Assault Centre of Nipissing. The monument is located at the Fisher Street Parkette, off the Kinsmen Trail. (Stu Campaigne, MyNorthBayNow.com staff)

It was a solemn affair with intertwined notions of remembrance, sisterhood, and hope.

At the unveiling of a pebble stone mosaic monument honouring the survivors of sexual violence, several dozen community members took in ceremonial drumming, singing, and speeches focusing on the plight of victims of gender-based violence.

The term victim, however, is receding in the vernacular of community partners working to eradicate gender-based and sexual violence. Brigitte Lebel, the Executive Director of Amelia Rising Sexual Assault Centre of Nipissing agrees with that sentiment. “When we think about the word ‘victim,’ it is true when sexual violence occurs, a person is a victim in that moment. So, the idea of ‘surviving,’ it’s a verb going into the future. To call yourself a survivor is moving you out of that victim place and taking your power back.”

For more on the pebble mosaic project and why the artists chose pebbles as a medium, see the video, courtesy of Red Dress Productions below:

The creation of the monument took a sizable collaboration in public artwork and coordination. The event held Friday afternoon in hot and humid conditions was both a celebration of the completion of the public artwork and a ‘thank you’ to all who helped and contributed along the way. The monument is located at the Fisher Street Parkette, just off the Kinsmen Trail, east of the traffic lights near Fisher Street and Princess Street East. In March, Toronto-based non-profit public art creators Red Dress Productions and Amelia Rising Sexual Assault Centre collaborated with 75 members of the North Bay community to create the unique six-foot diameter monument as a tribute to sexual assault survivors.

North Bay is one of five communities across Ontario who participated in the Countdown to Public Art Legacy Project, joining Brantford, Carleton Place, Eganville and Peterborough. Red Dress Productions says the project is the first of its kind in Canada, launching in 2016 after the Women’s Sexual Assault Centre of Renfrew County invited Red Dress Productions to bring its vision into being. Workshops were held with residents, municipal bodies, local partners, and artists in Pembroke, Eganville, Killaloe, and Pikwàkanagàn First Nation to create the first four monuments. Red Dress Productions will expand the project, continuing into 2022.