Change of command at 22 Wing 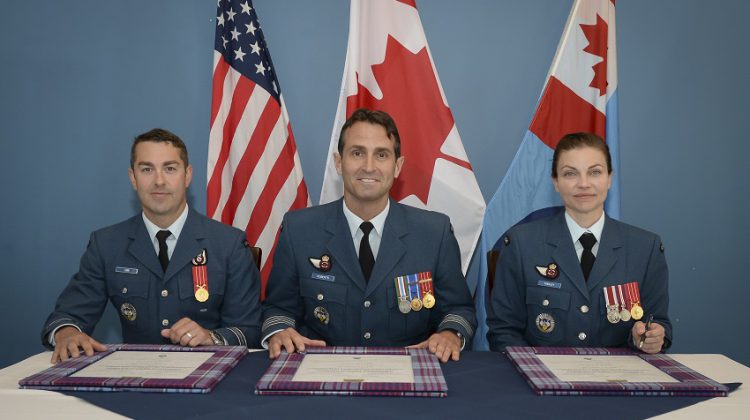 The commander who oversaw the development and opening of the state-of-the-art Mission Training Centre at 22 Wing in North Bay is moving on.

Tinsley was the first woman to command a squadron at 22 Wing.

Base commander Colonel Mark Roberts says her work on the Mission Training Centre allows personnel to be better prepared to meet threats which are becoming more diverse and complex.

Roberts adds Tinsley should be proud of her command at 22 Wing and adds she has truly made a difference.

Tinsley says it’s been a privilege to command 51 Squadron and also says the people are some of the most dedicated and hard-working operators, instructors and aviators that she’s had the honour to work with.

Tinsley says her successor’s battle management and training systems experience means the future of the Royal Canadian Air Force is in good hands.

He was also the Logistics Committee Chairperson of this year’s Relay for Life.

It trains nearly 200 operators each year.

As for Tinsley, she heads to the Canadian Forces College in Toronto where she’ll be a student in the Joint Command and Staff Program.

Tinsley was first posted at 22 Wing in 2002 when she worked as a weapons controller.

She came back to 22 Wing in 2016 where she worked in several departments before assuming command of 51 Squadron.

Major Andrew Lunn is also no stranger to 22 Wing.

His first posting at the base was in 2006 where he qualified as a weapons director.

He returned in 2011 and fulfilled several duties before being appointed Deputy Commanding Officer of 21 Aerospace Control and Warning Squadron last year and then assuming command of 51 Squadron this week.