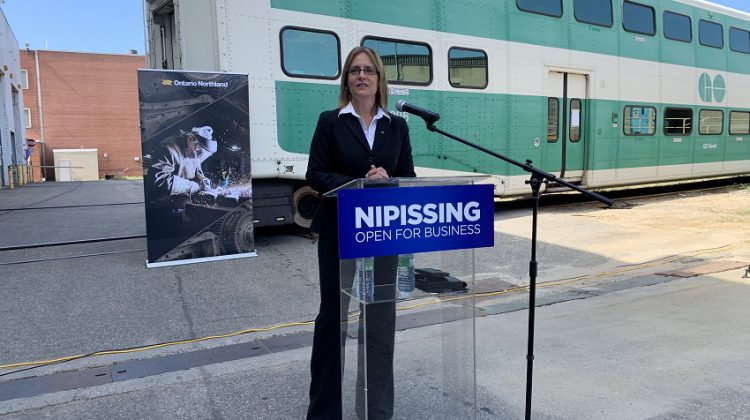 Corina Moore, President and CEO of Ontario Northland, hopes the refurbishment contract for 15 Metrolinx cars is the first of many. (Rocco Frangione, MyNorthBayNow.com staff)

After a nearly 10 year absence in North Bay, Metrolinx is making a return to the city by having Ontario Northland refurbish 15 of its bi-level passenger coaches.

The train cars will be refurbished at Ontario Northland’s Remanufacturing and Repair Centre in North Bay.

One of the GO coaches was on-site during the Wednesday morning announcement and it will be used as the prototype to ramp up the refurbishment program.

Corina Moore, the President and CEO of Ontario Northland says the ramping up process will take about nine months.

Asked how Ontario Northland was able to win back work from Metrolinx, Moore said it was “tireless efforts of advocating of proving that we could do this business.”

“We can do it competitively, and keep our high quality and do it at market rates and continue to prove that we know this business,” Moore said.

“We know it better than anyone else because there’s no other entity that does this work and runs a railway.”

In fact, Moore says Ontario Northland has employees with a skill set that no other worksite in North America has.

She says that’s a result of Ontario Northland also working on its rail assets.

The last time Metrolinx had Ontario Northland do any of its work was in 2011.

Moore says the plan is to do more of Metrolinx’s work after the 15 coaches are refurbished.

“Metrolinx has thousands of cars and a portion of those need to be remanufactured,” she said.

“They have a lifespan of 15 years and we’re hoping to continue the work because it could be never-ending.”

Moore says the initial work of 15 cars provides job security for the existing workforce but she adds depending how quickly Metrolinx wants the work done, could result in more people hired in the future.

Moore says over the years Ontario Northland has proven it can remanufacture rail equipment.

She says the employees have worked on 50 CN locomotives, they’ve completed 175 Procor tanker cars and she believes more work on the tanker cars is coming because of the abilities of the workers.

Moore says additionally, rail companies are having Ontario Northland work on their wheels as well as trucks.

She says Ontario Northland has done a lot of work in the last three years since diversifying its shops.

Some of that work includes working on the Rocky Mountaineer which is considered the luxury passenger train in the entire world.

Work was also done on trains owned by CN and AMT.

She believes this past and current work helped seal the deal with Metrolinx.

Moore adds Ontario Northland has worked well with its union saying the collective agreement was changed to make the ONTC very competitive.

She says when a company does work for CN, AMT or Rocky Mountaineer, these “are organizations that need competitive market rates and need high-quality work”.

Moore says Ontario Northland has proven it can deliver the goods.

Moore declined to say what the contract with Metrolinx is worth.

Less than 300 new cases of COVID-19 for second day