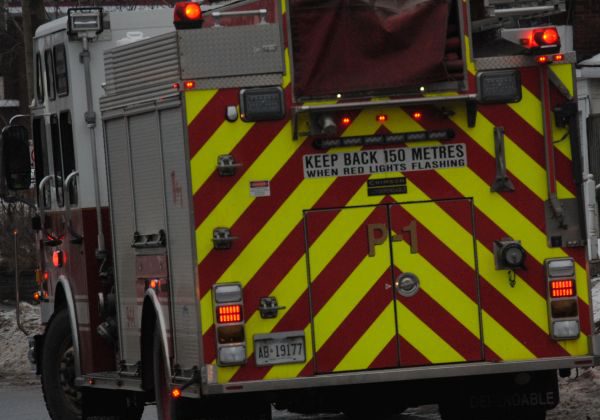 Monday afternoon, Deputy Chief Greg Saunders said fire crews from all three stations responded to a confirmed structure fire at 443 King Street West. Upon arrival, fire crews were faced with a basement fire in the single-family home. Fire crews conducted an interior fire attack and were very quickly able to manage the fire.

This home (at left) on King Street West was the site of a basement fire caused by an unattended candle. (Supplied by Gage Campaigne)

NBFES said before leaving the home, the occupant had left a candle burning. This was determined to be the cause of the fire. When the resident returned home, he realized the home was on fire and called 911. There were no working smoke alarms in the home.  Charges are pending.

Earlier Monday, fire crews responded to a structure fire in a townhouse complex at 111 Carruthers Avenue.  Upon arrival, a significant fire had already breached the window of the upstairs of one of the units. According to the Deputy Chief, fire crews were very effective conducting an interior fire attack which quickly brought the fire under control.

“The quick action by firefighters meant that the adjoining units were spared from significant fire damage,” said Saunders.  The residents were at home at the time of the fire and were able to evacuate thanks to the quick action of neighbours who notified them of the danger.  This incident could have been tragic as the smoke alarms in the residence had been disabled. Charges for the absence of smoke alarms are pending.  The cause of the fire is believed to be related to the careless use of smoking materials.