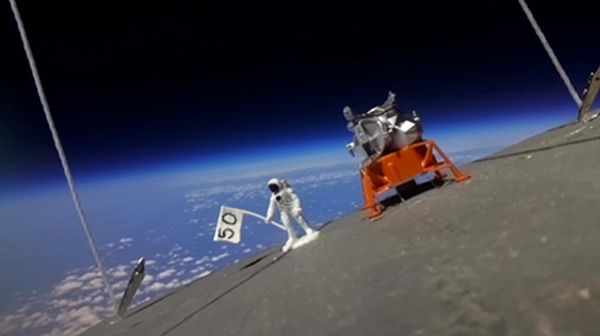 This photo (taken 30 km above Earth) has caught the eye of NASA. (Supplied by WFISS)

Kelly Shulman is on NASA’s radar.

It is thanks to an experiment conducted by Shulman and her students in May under the “West Ferris Near Space Program.”

“It is all because of a stratospheric balloon launch that we conducted here at the school,” Shulman explained. “It’s an educational activity where you have students set mission goals, and then design a payload which is typically a Styrofoam box full of components and sensors and cameras.”

The procedure from there is to launch the payload using a weather balloon, and once it gets to over 30 kilometres in altitude, the balloon bursts because there is very little air pressure. The payload will then come back down with a parachute. The students, who track the payload since launch, follow it to its landing zone and retrieve it.

A very exciting experiment to be sure, but how did that lead NASA to reach out and invite Shulman to come and speak at the Goddard Space Flight Centre for “Observe the Moon” night?

“The reason NASA paid attention to it is that we called it ‘The Flight of Apollo 19,’” relayed Shulman. “Among the sensors and cameras, and a solar panel experiment, we had also sent up these toys like a little lunar landing scene with an astronaut and moon lander. The astronaut was holding a flag that had a 50 on it and that whole scene was meant as a homage to NASA for the 50th anniversary of the moon landing.”

The picture taken of the scene on the weather balloon from 30 km up was sent to NASA, who emailed Shulman in July, just days before the anniversary to tell her that they had used the story in one of the articles for the celebration.

Shulman will make the trek down to NASA in early October, where she will get to share the story of her and her students’ successes with many of the people who are responsible for space exploration.