Get to know the Kiwanis Walk of Fame honourees: Week two – Mort Fellman 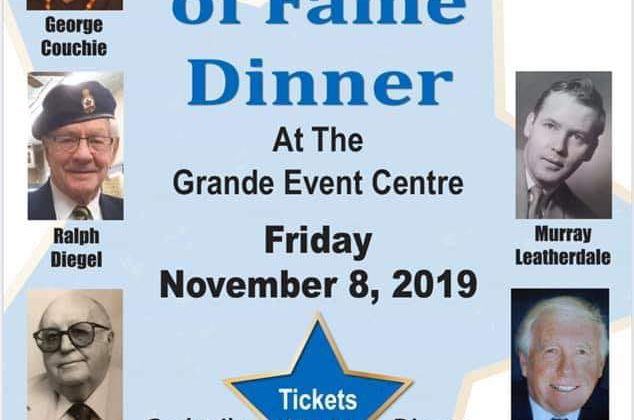 For many years in North Bay, that source was Mort Fellman.

“In 1967 he was one of four Canadian journalists invited to go behind the Berlin Wall,” Sandra Managhan, Mort’s granddaughter said. “He had a lot of respect and I felt that his story needed to be told.”

Sandra took it upon herself to nominate her grandfather for the Kiwanis Walk of Fame.

“I felt that he accomplished a lot for the city,” she explained. “He contributed so much. Some of the criteria were community involvement, national and international involvement  , and I thought he would be a good candidate.”

One might be forgiven if they haven’t heard of Mort Fellman. After all, he was from a different time, but from 1933-1976 he was the one that many turned to get the news in North Bay on a variety of subjects. Even if you have never heard of him, his stories helped shaped who we are as a community today.

“In 1934 he was the first reporter to provide to the world the Dionne Quintuplets announcement,” Managhan said. “He rode by bike out to Corbeil back in the day, because he didn’t have a driver’s license. He formed a friendship with the Dionne parents because at the time they didn’t know who they could trust and he became good friends with them and advised them on many different aspects.

“He also accompanied the Dionnes to New York City back in the ’50s and he had a fond relationship with Mr. Dionne in particular.”

A year later, Fellman along with Britt Jessup, uncovered the real identity of Grey Owl as Archie Belanie.

“Grey Owl’s first wife, she lived in Temagami,” Managhan explained. “She had gotten a hold of Britt Jessup, and he, through Mort, discovered the true identity through this first wife because she wanted everyone to know that he was not an aboriginal but rather an Englishman.

“The interesting thing about it is that they learned about this three years before his death. They decided not to expose him. It was the time of the depression and there was a lot going on so they decided that this would be best to be kept quiet because Grey Owl was doing so much good. They had decided that once he passed they would expose him, which was huge.”

Having a nose for news benefited Fellman greatly throughout his life, but one of his leads led to keeping a secret from his family for years.

“During World War Two, Mort received a tip through some friends who were railway workers and talking to him about the activity at the Chalk River plant,” Sandra stated. “After investigating it, he found out by the RCMP coming to him at work to accompany him to Ottawa because he was getting too close to what was going on.

“In turn, it ended up being the Atomic Bomb that ended the war. Mort was one who could keep a secret, which nowadays is very hard. He was concerned about telling his wife while he was sleeping so it was years before he said anything.”

Mort also was recognized with awards for his journalism. In 1955 he won the National Award for Editorial Writing, as well as being inducted in 1980 to the National News Hall of Fame.

Along with reporting on the news, Mort had a love for sports. Part of his job saw him covering local hockey games on the outdoor rink in very cold temperatures. That didn’t deter Fellman however, as he would stop in at the police station on his way back into the office to warm up and chat with some friends.

If you didn’t see Mort at a hockey game, chances are you would see him coaching baseball in the summer.

As for the recognition with the Walk of Fame, Managhan says it is a great honour for the family.

“He had a huge impact on the making of our history. It is very special for my family. My Mom passed away but she would be delighted to hear that the Kiwanis club is honouring him in such a fashion. His other two daughters are still with us and are very ecstatic.

“Kudos to the Kiwanis club for honouring people that have formed the city.”

For Fellman, his legacy lives on through his great-granddaughter Emily Haws, who has followed in Mort’s journalism footsteps. And now, his legacy will also live on permanently at the corner of Main and Ferguson.