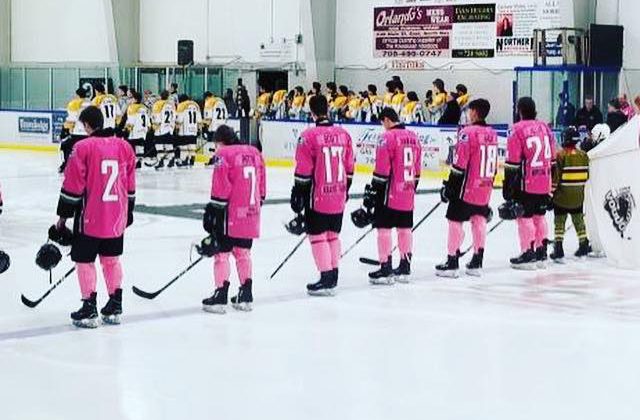 The Powassan Voodoos are gearing up for their annual “Pink in the Rink” game.

“I think we have really nice pink jerseys,” Head Coach Max Gavin said. “Last year I was at the Eastern Canada Cup so I didn’t get to experience Pink in the Rink. I am excited to experience it. I know our team behind the scenes has been working very hard to make this a successful event and I think it is special.”

The team will be auctioning the game-worn pink jerseys with all benefits going to cancer research, much like the Battalion game from a week ago.

“I was at the Battalion one and I saw that Brandon Coe’s dad was there and it was in honour of him,” Gavin stated. “You don’t know those things, so there might be connections to cancer on our team where the game means more to them or on the other team too.”

This year, local reporter Britt Bortolon, who was recently diagnosed with cancer will be dropping the puck for the ceremonial faceoff. Bortolon has had to take some time off from work recently for her treatments.

A friend of Bortolon, and fellow reporter, Clarke Heipel has been raising funds and awareness on Bortolon’s behalf.

“It’s going to be a surreal moment, she is a larger than life figure now,” Heipel said. “She is so inspirational and it is so emotional talking about it right now. It’s going to be an amazing time, I can’t wait.”

Heipel has started a movement dubbed #Brittsbevy in relation to his friend and has seen support grow through not just the media in town, but also the community as a whole.

“It has been an eye opener. When you see people pour their hearts into it, write me cheques and give me money from their wallet for Britt, it is really inspirational.”

As for the game itself, Gavin says THIS is the one you want to attend.

“I think it is special that the league does it. I think it is great to raise awareness and great to raise money for a great cause. It adds a little bit extra for the game too, and I think it will be a heck of a hockey game and if there was a game for fans to come to, this would be the one I would suggest.”

The Voodoos will be hosting the Timmins Rock tomorrow at the Powassan Sportsplex starting at 7:00pm.