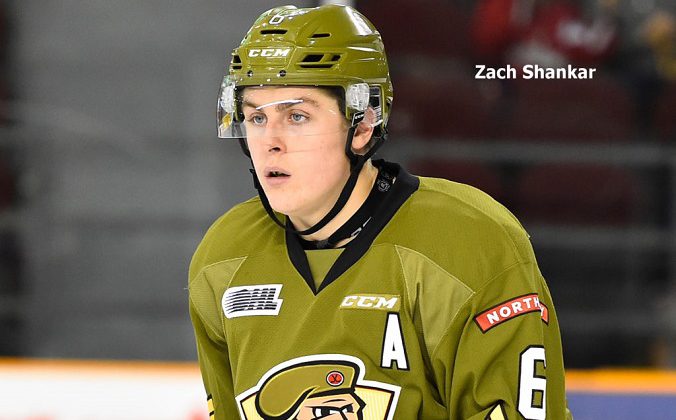 Zach Shankar with the Battalion. (Supplied by North Bay Battalion)

Wednesday night University hockey at Memorial Gardens this week promises to be a memorable one.

The game features the Nipissing Lakers hosting the Ryerson Rams which in itself would be enough of a draw, but the game also will see six North Bay Battalion alumni return to the ice they skated during their OHL careers.

Playing for the Rams tonight is former goaltending prospect Garrett Forrest, along with Zach Shankar, Mark Shoemaker, and household names like Steve Harland and Matthew Santos. The Lakers counter with goalie Brent Moran. Not to mention, the former affiliate team, Powassan Voodoos can count three alumni among the group with Harland, Forrest, and Lakers defenceman Cameron Moore.

“Ryerson has a bunch of our guys,” Battalion head coach and director of hockey operations Stan Butler said. “Forrest was a draft pick of ours that we traded over, we have Shoemaker there, Harland, Shankar, and Santos.”

“A guy like Matt Santos, he has an interesting story. He made our team as a walk-on and played four years for us and had a pretty good track record. When you find guys like that, it’s probably why you go to the OHL final.”

Santos saw a steady progression throughout his OHL career. His first season, with the then Brampton Battalion, saw him net 15 points in 57 games. His last season, in 2015/16, and wearing an “A” on his jersey, saw him score 69 points in 64 games. After he graduated from the Battalion program, Santos made his way to Toledo to play in the East Coast Hockey League with the Walleye, an affiliate team of the Detroit Red Wings, before taking the school route with Ryerson.

“Matt had the most goals in U sports last year,” Butler stated. “He’s off again to being a top scorer again this year. Stevie Harland is playing well there, Shankar and Shoemaker are playing well as well.”

“It’s great to see those guys and it shows a commitment in our program about education. A lot of these players, if they don’t make it as pro hockey players, they have the foundations necessary to play U sports hockey.”

It has been a memorable few days for the Troops head coach, as a former understudy of Butler’s with the Prince George Cougars, Zdeno Chara, just played in his 1,500th game in the NHL.

“I chatted with him yesterday,” Butler said. “I said ‘you’re making me feel old’ and he said ‘I’m making you feel old? I’m the oldest player in the NHL.’”