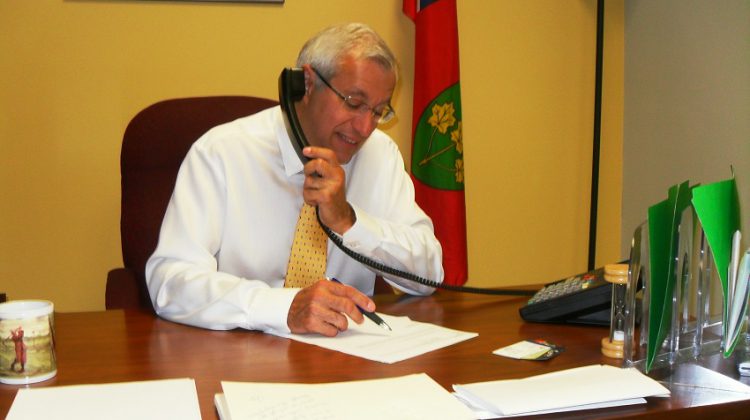 Nipissing MPP Vic Fedeli says the Ford government remains committed to reducing electricity rates by 12 percent during its first term in office.
The comment follows the release of a study by the Fraser Institute that found instead of falling 12 percent under the Tories, electricity has risen.
The increase varies depending on where people live and has gone up for both homeowners and businesses.
The study points out Ontario’s electricity costs ballooned under the former Liberal governments of Dalton McGuinty and Kathleen Wynne as a result of expensive solar and wind contracts they signed with the private sector.
Fedeli made a point of emphasizing this.
“We now know the Liberals tried to fool the people of Ontario with their Fair Hydro Plan which hid the cost of electricity from taxpayers,” Fedeli said.
Fedeli says people’s electricity bills began showing the true cost of electricity beginning this month but adds the rebate is compensating the public for that rise and future increases will be held to the rate of inflation.
Fedeli said the Ford government continues to investigate “all avenues on how we can lower the price of hydro right across the board and deliver on our promise.”
Timiskaming-Cochrane MPP John Vanthof was critical of the Ford government’s attempt on reducing electricity saying Premier Doug Ford had no plan.
However, Fedeli says there is a plan.
He says shortly after taking office last year, the new Progressive Conservative government cancelled solar and wind contracts that had not yet taken effect.
He says cancelling those contracts kept a further $790-million dollars from being added to people’s hydro bills and adds Vanthof’s New Democrats voted against that measure.
Fedeli says cancelling those deals before they took effect has been a huge first step to lowering rates.
He says another initiative has been to cancel the former cap and trade program which removed taxes off people’s natural gas bills.
Fedeli didn’t answer the question of whether it’s possible to cancel the long-term solar and wind contracts signed years ago under former Premier Dalton McGuinty without incurring cancellation penalties.
Instead, he responded by saying the Ford government will make sure that these contracts are honoured by the vendors.
Fedeli says the Tories are only 15 months into a four-year term.
“It’s our intention to honour all our promises,” he said.
“We intend to deliver on our promise to restore trust in the energy sector and make the bills more transparent.”