Cory Marks hits a live wire with “Outlaws and Outsiders” 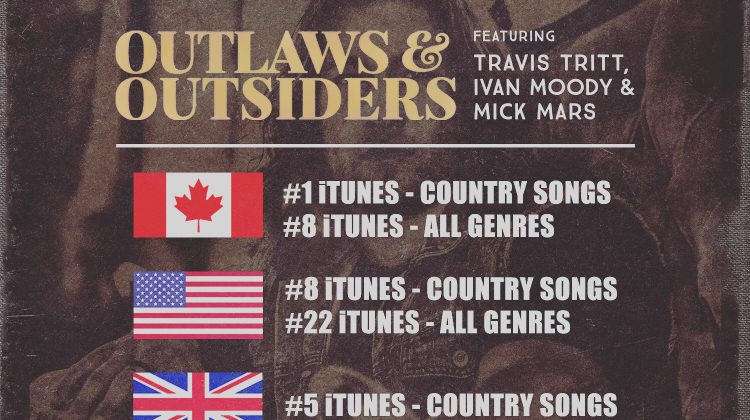 Cory Marks "Outlaws and Outsiders" has gone to the top on iTunes charts all over the world. (Supplied by Cory Marks)

The North Bay country artist recently released his new song “Outlaws and Outsiders” and it has gone straight to the top.

“It’s been a long time, but we have been planning and working on this record for a while,” Marks said over the phone. “It’s just really nice to have new music out.”

“It’s very cool,” Marks stated. “I have worked so hard for this and so has my team. To release this song and to not know what to expect, and being heavier, it is cool to not only play on country radio but US radio. It’s been mind-blowing.”

“It has been a worldwide success, and I hope it continues from here.”

Cory began his interest in music at a young age when he picked up a pair of drumsticks and started to play the drums. It wasn’t until he was at the Royal Military College (RMC) in Kingston that he really began to play guitar. Because of his background keeping the beat, Marks actually got to show off his chops on the upcoming album.

“On this record, I got to play drums, as well as vocals and guitar. Where that all changed, I was studying and playing hockey, I started with guitar a little bit because I couldn’t bring my drum kit with me. I was uploading covers on YouTube because I was too nervous to sing in front of people.”

“One night we were out and my friend was playing and my friends went behind my back and got me up on stage during a break. I think I sang a song that I had written and a couple of covers, and after people were asking where else I was playing and if I had music out and where they could get it. Long story short, it didn’t work out at RMC so I came home and started playing in the bars and never looked back.”

Marks’ journey hasn’t always been positive, but he has kept a level head about his career and it seems to be paying off for him now judging by the reception he received upon releasing Outlaws and Outsiders.

“The journey has had lots of ups and lots of downs. It was always a struggle to get on Canadian country radio. You have to have the right surroundings. I am just excited to be able to play these songs on the record as parts of it I wrote four years ago so I am looking forward to letting everyone hear it. It has been a whirlwind.”

The song also has guest appearances by Travis Tritt, Ivan Moody of Five Finger Death Punch and Mick Mars who is the lead guitarist in Motley Crue. So to use Marks’ words, that does seem like quite a whirlwind.

“We wrote the song and had it recorded a few years ago,” Marks explained. “Once we got onto Better Noise, my record label, we wanted to get some features on it. We sent it out to people that we thought would be good features, and lucky for me they all loved the song and wanted to be a part of this new sound. I am very fortunate and lucky and thankful to have them on it.”

Cory will be heading out on a western Canada tour in February with Gord Bamford and says the plan is, if not to have an album out, to have more music released by then.

“It’s been a lot of ups and downs, but that’s life and that’s how it is,” Marks said. “We’re going to ride this wave and hit the road very soon and have some fun with this record.”

You can catch the song on all streaming platforms. (Supplied by Cory Marks)