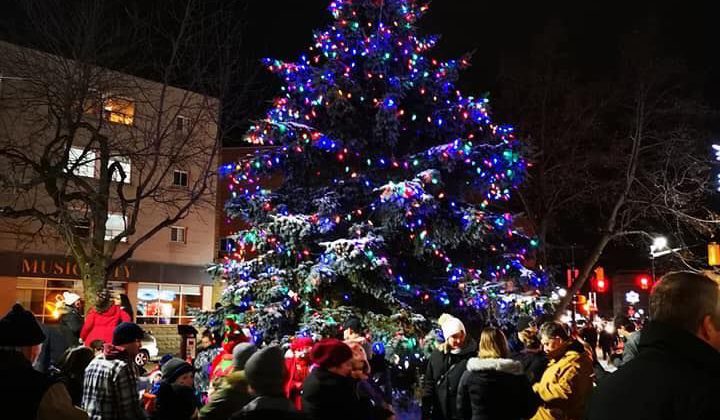 The tree-lighting ceremony will kick off the 31st Old Fashion Christmas Walk in North Bay. (Supplied by DIA)

The event features numerous Christmas-themed events including a horse-drawn wagon, choirs and musicians at several outlets and a tree lighting ceremony.

The lighting ceremony kicks off the Old Fashion Christmas Walk.

Dignitaries, including Mayor Al McDonald, Nipissing –Timiskaming MP Anthony Rota and Nipissing MPP Vic Fedeli will be picked up at City Hall in the horse-drawn wagon and taken to the Diegel Parkette across from the CIBC in time for the 6:00pm lighting.

Leading the dignitaries will be the St. Joseph Scollard Hall Marching Band.

Michelle Trudeau, the chair of the DIA, says this year’s tree is perhaps the tallest the DIA has ever had saying the group had to buy an additional 450 feet of strands of light in order to surround the tree.

Margaret and James Cluff of North Bay donated the tree.

Trudeau says securing the horse-drawn wagon was a challenge this year and the Christmas Walk almost didn’t have a wagon to provide rides for the public as it has in the past.

“But thanks to the International Plowing Match in Verner in September we got a name from there and hooked up with Trevor Hammond Family Ranch of Powassan,” Trudeau said.

“He built the wagon specifically for us and it can accommodate 15 people at a time.”

Trudeau says 8,000 to 10,000 people took in last year’s Christmas Walk and believes about the same number will take in this year’s event considering good weather is expected.

One of the events that will be back is the snowboarding competition hosted by Cheapskates.

Trudeau notes there hasn’t been much snow and this has created a challenge to hold the snowboard competition.

But efforts are underway to get snow brought in from different sites and adds the City is helping in this area.

Also back is North Bay Hydro with its bucket rides and the fire pit at the empty lot between the Guardian Pharmacy and walkway building.

Trudeau says the empty lot will also have a portable screen where the producers who recently filmed the Angel Falls 2 movie in North Bay will be screening Angel Falls 1 for the public.

Bales of hay will be brought in so spectators can sit and enjoy the first version of the movie and toast marshmallows.

The former Gulliver’s book store will once again serve as a hub for various activities during the Christmas Walk after a successful debut last year. (Rocco Frangione, MyNorthBayNow.com staff)

The DIA tried something new last year and has brought back the service.

When Gulliver’s book store closed, the DIA turned it into the Downtown Holiday Hub where people can get their pictures taken and gifts wrapped.

On the gift wrapping, Trudeau says the DIA is “asking for a donation and we’re putting that toward the gd2go warming centre.”

Trudeau says this is the Tree of Joy which is selling lightbulbs for $5 apiece as a museum fundraiser. 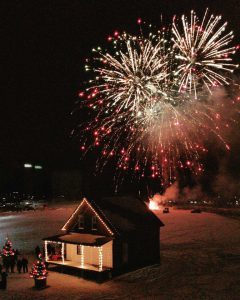 A fireworks show will again cap the Old Fashion Christmas Walk this year. (Supplied by DIA)

She says the event was so well received that the DIA will hold the fireworks show every year.

The fireworks will go off behind the museum shortly after the Tree of Joy lighting ceremony.

The Old Fashion Christmas Walk takes place from 6:00pm to 9:00pm on Main Street and the core part of the street where all events are scheduled will be closed to motor vehicle traffic.