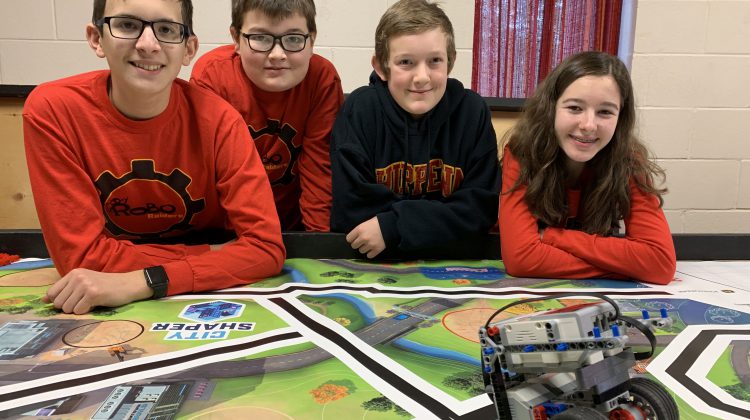 Sixteen teams, including many from Nipissing District, are competing Saturday in the annual LEGO robot competition.

For the last couple of months students from Grades 4 to 8 have been using LEGO parts to build robots that they use during the competition to complete various missions for which they are awarded points.

Two overall winners will be declared and they will go on to the Ontario championships January 11th in Oshawa.

The Oshawa event will also declare two champions who will then head to Detroit in April for the world championships.

In the weekend competition, the students add motors to their robots so they can move about performing their various tasks.

One of the teams entered in the weekend event is the Robo Raiders from Chippewa Intermediate and Secondary School.

Six students make up the Robo Raiders including team captain Michael Iounatanov who is in Grade 8.

Iounatanov is no stranger to building robots from LEGO parts.

He was part of a LEGO robot team when he was in Grade 5 at WJ Fricker Public School.

He designed the robot he and his classmates assembled.

The Robo Raiders robot has two motors and after some trial runs the students added a bumper to it to make it easier to turn.

Iounatanov says one of the tasks or missions the teams will have to do is push blocks with a scoop that’s attached to the robot.

“The attachment on the robot will push the blocks and we stack them in a way to get more points,” he said.

“It can also go backward and turn and we’ll also get points for that.”

This is all done with the students not touching the robot once it begins to move.

And all the movements are predetermined beforehand with coding instructions the students input into the robot.

Teammate Ava Morin, who is also in Grade 8, says one of the hardest challenges for the Robo Raiders has been the collaboration because except for Iounatanov, none of the students have any experience with making robots from LEGO parts.

“So we’re trying to contribute more ideas to each other,” Morin said.

“We’re trying to come up with different ways to make everything better.  That’s been the hardest part, the collaboration and teamwork.”

Marla Sunstrum is the Chippewa teacher that has helped the students but purely as a facilitator.

Under the rules, adults cannot help the students build any of the robots.

Sunstrum says the LEGO robot competition makes for a valuable learning experience for the students.

“They learn about teamwork and have fun being innovative,” she said.

“They also have to put together a presentation which improves their public speaking skills and they also learn to do research.”

Sunstrum points out one of the important elements of the competition is the coding instructions the students input into the robots.

She says this is a “desirable skill to have in the job market.”

“There are jobs in these areas,” she said.

Opening ceremonies begin at 8:00am and that’s followed by a full day of competitions with the awards ceremony scheduled shortly after 3:30pm.

Some of the other teams taking part are the West Nipissing Robotics Kool Bots, 250 Clark from Powassan and the Tiger Robotics from St. Theresa School.

A team is also coming up from Toronto and another from Peterborough.

‘Careless cooking’ most likely the cause of house fire