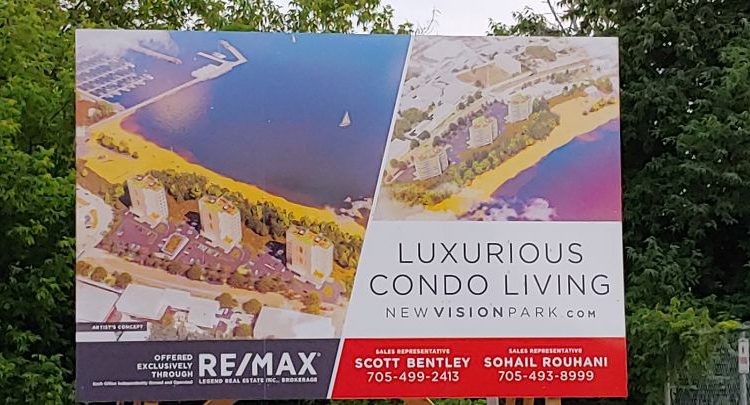 New Vision Park Property has until April 2020 to carry out due diligence at former Kenroc site for multi-condo development. (Stu Campaigne, MyNorthBayNow.com staff)

The Sudbury-based company that wants to build three condominiums at a former industrial site in North Bay has been given more time to close the deal with City Hall.

The deal by New Vision Park Property to buy the former Kenroc site from the city at $25,000 was to close in August.

However, Mayor Al McDonald says New Vision needs a bit more time to carry out due diligence work at the contaminated site so council has extended the purchase closing date to April 2020.

McDonald admits there hasn’t been much interest in the land over the years because of its contaminated nature despite the fact it overlooks the waterfront.

A previous potential buyer looked at the land about 10 years ago when Nipissing MPP Vic Fedeli was Mayor of the city.

That proposal called for a hotel and convention centre to be built on the site.

McDonald says that proponent went as far as to carry out an environmental assessment of the land and afterward decided not to pursue the project.

City Hall bought the environmental assessment study from the earlier proponent and now New Vision has it.

McDonald is hopeful that with the extension for more due diligence, New Vision can develop the condos.

McDonald says New Vision has the capability and financing to build the local condos.

“They’ve done large developments in other centres,” said the Mayor.

“But at the end of the day, they still have to do their due diligence.  We have our fingers crossed that they move ahead.”

When it was announced last year, the North Bay project called for the three buildings to house 21 units each.

Each building would cost about $5 million to erect.

McDonald says as a contaminated site he understands why New Vision needs more time to carry out more due diligence.

“They want to satisfy all their needs but they’re still interested in the property,” he said.

In a worst-case scenario McDonald says if New Vision decides not to pursue the condo development, the city would likely put out a Request For Proposals to see if any other developers are interested in the land.