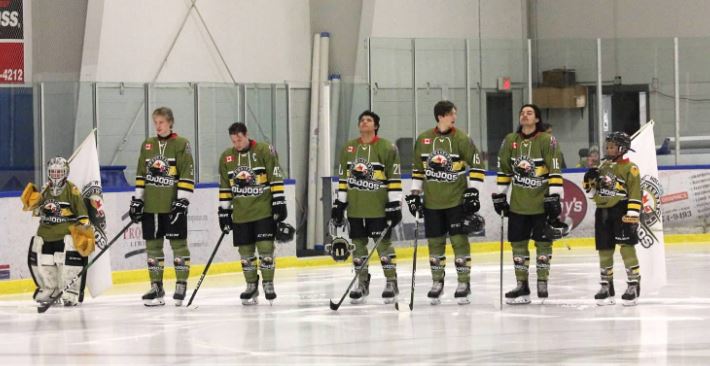 Voodoos standing at the ready. (Supplied by the Powassan Voodoos)

Rocky times are upon the Powassan Voodoos.

The team no longer holds first in the NOJHL after a stretch that has seen them go 5-5 in their last 10 games. To be fair to the team, Hearst has surpassed them in the standings (51 points to 50) at the time of this article, but Powassan has played five fewer games.

When we last caught up with the team last week, they were coming off of a 5-3 victory over the Cochrane Crunch. Since then, they fell 4-1 to the Timmins Rock and 5-1 to the Lumberjacks to round out the three games in three nights up north.

“Going into it, you want to get all three wins,” head coach Max Gavin said. “Not to make excuses, but the injuries, the suspensions that we were getting through that weekend and missing a goaltender as well, usually when you have two goaltenders for three games, which means one guy will play two and the other will get one in between to break it up.”

“Again, not to make excuses but going short, having some affiliated players in the lineup who did a great job filling in, but it wore on us a bit,” Gavin continued.

Luke Greenwood, the typical 1B to Owen Say, started all three games as Say is away at the 2019 Junior “A” Hockey Challenge in British Columbia. As Leafs fans can attest, it is a tall task to ask a netminder to start games on back to back days, let alone three back to backs.

“Normally we would never want to do that because I don’t think that sets anyone up for success,” Gavin said. “I thought we managed the games well enough where we didn’t get peppered with shots. For him, it was ‘give us a chance to win’ and every game he did and I was very proud of him for stepping up as a young goaltender in his first year of junior hockey.”

“The boys fought hard,” Gavin continued. “Some of the scores might look worse than the games actually were. We had lots of chances to score too.”

Ebbs and flows are natural in a season of hockey, and some nights you just run into a hot goalie like the Voodoos did in Timmins and Hearst. It’s all about how you bounce back.

“We had our stats guy with us on the weekend and he keeps track of scoring chances for and against,” Gavin stated. “Our turnovers and scoring chances weren’t relative to the scores. That shows you that you’re getting opportunities and not giving up tons. When you look at that from a deeper perspective instead of just scoreboards, it tells a different story for us. Not that we think it is good enough, but in the end, we felt we handled it as best as we could.” 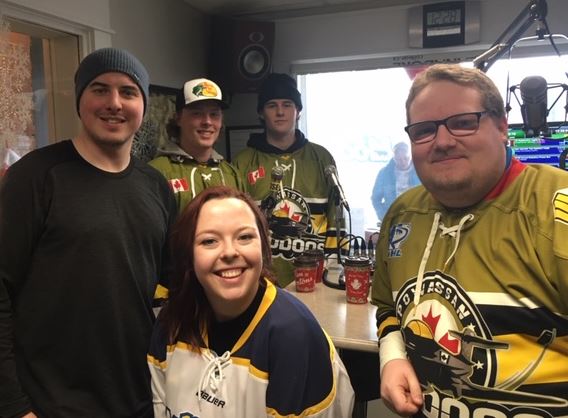 In the back, Voodoos players Noah Brant and Sam Ellwood join head coach Max Gavin at Moose 106.3 with Moose Midday Host Jess Wernick and news reporter Kortney Kenney for the radiothon. (Supplied by the Powassan Voodoos)

Since the 21 game win streak, Powassan holds a 2-5 record in the seven games, but Gavin is keeping a level head.

“We have had some struggles,” Gavin pointed out. “The thing is we also won 21 straight games with limited struggles. You don’t win 21 games in a row by mistake, but you don’t get to where we are in the last 10 games by mistake either. I think it’s just getting back to the ground floor, starting fresh and resetting our self.”

“I think everyone is guilty of getting caught up in the streak,” Gavin stated. “I think that now that it’s done, and we have had a bit of up and down lately, it’s just like let’s reset, let’s get back to basics and build back up. We still have 25, 26 games left so we have plenty of time to make adjustments, tinker with things and make sure we are ready come playoff time.”

One thing you might have seen Coach Gavin say this year is the talent in the East Division is incredibly close. As mentioned, Hearst has a one-point lead, but Timmins is right behind with 46 points, and in three fewer games played.

“Us, Hearst, Timmins, Cochrane, French River, Kirkland Lake, if you don’t show up to play it’s not going to be an easy night,” Gavin said. “It’s a good thing for our league. Both sides are tight, I think everyone has almost beaten everyone for the most part. The league is getting deeper, and it’s good for our guys to learn to be everyday players and it can get lost in junior hockey.”

“You’re not just going to walk into a building and be able to show up and play, which is what we are learning,” Gavin explained.

The Voodoos wrap up their home schedule for 2019 Friday when they welcome the Elliot Lake Wildcats. After this game, Powassan will have played at least one game against every team in the NOJHL this season.

“They made a coaching change last week and they played a 6-5 game against Rayside who is second,” Gavin said. “I expect a competitive game. They have a good solid goalie and every game is a battle and I expect nothing less from Elliot Lake.”