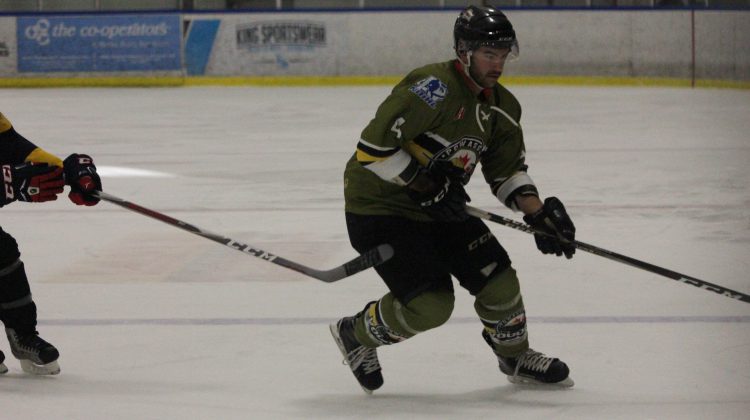 Voodoos defender Eric Allair in action against the OPP all-stars Sunday. (Supplied by the Powassan Voodoos)

The Powassan Voodoos got back into their dominant ways from earlier in the season this week.

The team came away with a 7-0 win over the Elliot Lake Wildcats, and a hard-fought 4-1 victory over the French River Rapids.

“It’s like we have talked about before, we had guys coming back from injuries and suspensions,” head coach Max Gavin said in the away coaches office in Noelville on Wednesday. “I think when you have a full lineup, you can roll all four lines and guys are allowed to play more of a 60-minute game as a group. I think it has shown and hopefully, we are coming along, we have one more to finish off the right way before the break and head into the second half on a good note.”

Earlier this week the Voodoos made a move to beef up their defence corps by re-acquiring Eric Allair. Allair has spent parts of four seasons with Powassan and was their captain for the 2018/19 season. He also played in 29 games with the North Bay Battalion in the OHL over two seasons.

“Eric brings a lot of toughness, a lot of grit,” Gavin said. “He has a 200-foot game, I think he can do a bit of everything. He was huge on the penalty kill, chipped in five on five and played a steady game and he got us fired up as well. Credit to him, he’s a big influence in the room too.”

The “fired up” that Coach Gavin is referring to would be that Allair dropped the gloves with Rapids player Kyle Avery. The fight would put an end to the defender’s first game back with Powassan early at the 10:30 mark of the second period.

As previously mentioned, the Voodoos have one more game before their holiday break that comes Friday when they travel to Elliot Lake in a rematch against the Wildcats.

“It’s going to be a tough game,” Gavin explained. “We have to show up ready to play, ready to go and if we don’t do that it’s going to be tough. We have to come, play our game and roll into the break the right way.”

As for the break, Gavin says it is something everyone is looking forward to.

“Guys are banged up, guys are hurt, and guys get into the lull of the season, it happens,” Gavin said. “It’s a lot of early morning practices, a lot of workouts, and a lot of time together. Sometimes a good little 10-day break is healthy for everybody and resets you going into the second half and guys get excited to come back.”