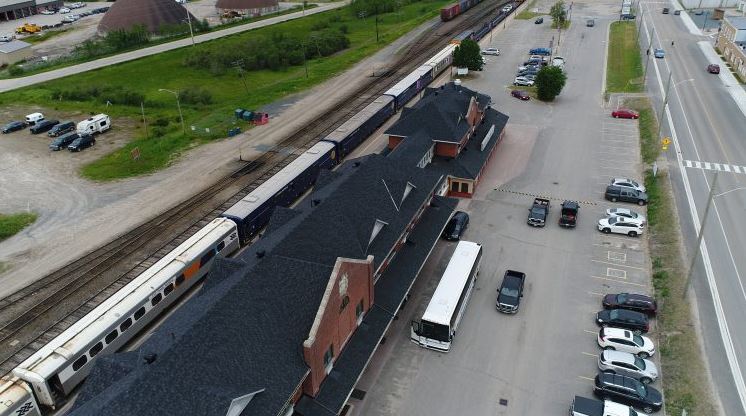 Cochrane station is pictured with the Northlander and bus service. (Supplied by Lucille Frith)

Fedeli says the Tories still have two-and-a-half years to deliver on their promise and he believes transferring the Ontario Northland Transportation Commission to the Ministry of Transportation will make the promise a reality.

Vanthof acknowledges the move to the MTO could very well result in a return of passenger rail service but he says nothing has happened to date adding the move is something the Ford government is only contemplating at this time.

Vanthof says northerners should worry when the Tories make an announcement because there’s proof that they don’t follow through.

“Just look at what’s happening elsewhere in the province,” he said.

“In Hamilton, they started a light passenger rail transportation project and they were about $200 million into to it and then cancelled it.”

Vanthof says June marks the halfway point of the Ford government mandate and there’s still no concrete evidence that rail passenger service will resume in the north.

“We’re at the point we have to start worrying,” he said.

But Fedeli says the former Liberal government with help from the NDP is a major reason why it’s been difficult to restart passenger rail service.

“The Liberals gutted Ontario Northland with support from the NDP in the minority government,” Fedeli said.

“That’s how it happened and it took away a lot of infrastructure that we required for the return of passenger rail.  So it’s a bigger job because of those changes.”

Fedeli says transferring the ONTC to the MTO is something that management, the unions and municipal councils in the north have lobbied for over the years.

He doesn’t have specifics, but Fedeli says it’s his understanding that the transfer will help facilitate a return to passenger rail because once it’s under the MTO, the ONTC will be more efficient.

Fedeli says he’s pleased with how the process is unfolding and emphasizes there’s still time in the four-year government mandate to see a return of passenger rail.

“It’s a promise made and a promise that will be kept,” Fedeli said.