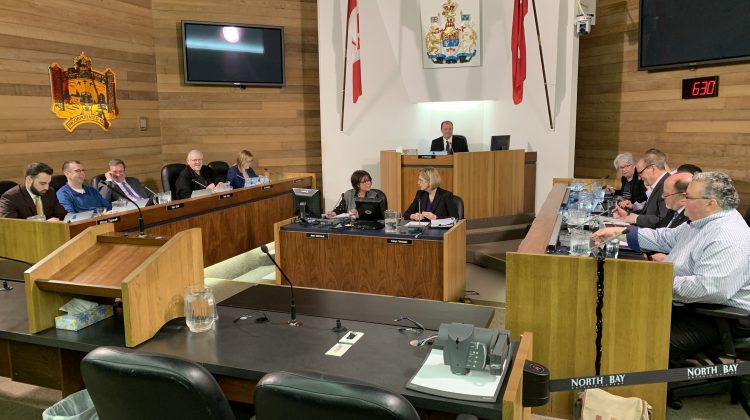 North Bay council has rejected the notion of adopting a ward system for the present time.

In a 6-4 vote, councillors rejected a motion from councillor Marcus Tignanelli asking staff to examine the merits of a ward system over the current standard of having a council at large.

Tignanelli’s motion called on staff to prepare a report on what a ward system could look like.

He personally said he was “not married to a ward system” but simply wanted facts and information.

Tignanelli said if adopted, the goal would have been to break the city up into wards in time for the 2022 election.

However, there was strong opposition to switching the electoral system.

Councillor Bill Vrebosch said there may be a perception that people get better representation under a ward system.

But he was worried that this would also result in a barter system among elected officials where a councillor supports a colleague’s resolution in return for getting support from that councillor in a future resolution.

He also expressed concern that getting staff to investigate the merits of a ward system takes their attention away from other issues, a concern echoed by councillor Mark King.

King said when he ran for re-election in 2018 he made it clear then he would not support a ward system.

King was also worried that wards would create divisions in the city.

As an example, he used the proposed community centre for West Ferris and where that facility might instead be located if councillors fought for the building for the ward they represent rather than locating it where it makes the most sense.

Deputy Mayor Tanya Vrebosch also opposed the motion saying one look around the council table tells people the city is well represented by its elected officials who live in different parts of the community.

But Vrebosch also said perhaps in the future if North Bay was to amalgamate with surrounding communities like Callander, then it might be worthwhile to consider wards.

Councillor Chris Mayne admitted he has not been a fan of wards in the past for the very reasons his colleagues put forth at the Tuesday meeting.

“But I like to be open to new ideas and support the motion,” Mayne said in throwing his support behind Tignanelli.

However, with the motion defeated Tignanelli said he had no plans to re-visit the issue during this term adding it would be up to the next council to once again consider a ward system sometime in the future.

“Like I’ve said a hundred times before, I don’t care if we go to a ward system or stay at large,” he said.

“I just want to make an informed decision.”

Tignanelli said he campaigned in 2018 to look into a ward system.

He believes the majority of council voting against his resolution is a lost opportunity.

Tignanelli says he’s not disappointed with his motion but he’s “disappointed in the lack of open-mindedness and unwillingness to learn” on the part of his fellow councillors.