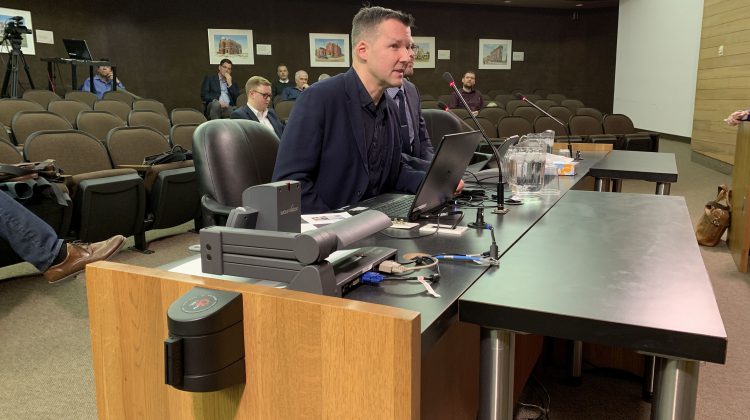 The proposed community centre and arena for West Ferris is a three-pronged, Y-shaped building that will cost $29-$31 million dollars.

Mark Downing, a senior associate with MJMA, says the building will house two NHL-sized rinks, one of which is a tournament rink and the other a practice rink.

Where all three parts are connected in the middle Downing says this creates the public heart or social space of the facility where people can look at both ice pads at once.

Each of the rinks will be equipped with change rooms.

The building is also by the Steve Omischl Sports Complex.

Downing says one of the crown jewels of the proposed building is the walking track on the second floor. 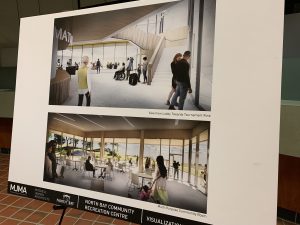 The stairwell in this artist rendering takes the public to the second floor of the community centre where the walking track is located and offers spectacular views. (Rocco Frangione, MyNorthBayNow.com staff)

From here people can look down on the tournament rink.

There is also viewing space for about 300 people to watch the play on the ice from the walking track.

For the tournament rink itself, there are about 250 bench seats and another 100 seats in the social heart of the building for a total seating and viewing capacity of about 600.

Downing says the existing bedrock and forested areas played a large role in where to situate the building and what shape it would take.

Downing says the architects went through many configurations before deciding on the Y-shape, three-pronged look. 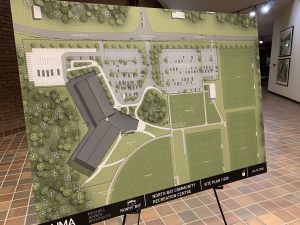 The look of the proposed community centre and arena in West Ferris. (Rocco Frangione, MyNorthBayNow.com staff)

“We have never done this kind of shape before.”

Downing says when the architects began looking at the project they first came up with a building that would be 90,000 square feet in size.

However, he said in talking to the stakeholders there was an agreement that the different user groups would be able to share spaces throughout the seasons.

This cooperation allowed the designers to shrink the size of the proposed building to 74,000 square feet.

That’s the size of the building the public saw during an open house Wednesday at City Hall which featured several looks to the building’s interior and exterior.

Downing says one of the objectives of the architects is to give the community a finished piece with enough foresight built-in that the city doesn’t have to make additions to it in just a couple of years because it’s discovered more space is needed.

Downing says the building is barrier-free and will also be very energy efficient.

As an example he says, the heating system the building will incorporate is to capture wasted heat and use that as radiant heat for different parts of the facility.

In response to a question from councillor Mike Anthony, Downing says it should spur small businesses like pops up or kiosks.

However, in response to a question from councillor Marcus Tignanelli, Downing doubts a more structured retail operation housing a larger tenant could operate at the facility.

He says it’s been his experience that food snacks and drinks available at similar community centre-arena type buildings are run by volunteers.

Downing says one thing the designers will take a closer look at is the power requirements.

This is in response to a question from councillor Mark King who wants to see trade shows like boat and home shows take place in the new building and to pull that off the participants will need plenty of electricity.

King also suggested a section of the new building be set aside to house historical artifacts now at the West Ferris Arena.

The exterior look of the building in terms of the type of material to use for it hasn’t been decided yet.

The finished complex will have space for 470 vehicles.

Assuming there are no delays with the final design look, tenders could go out in late summer and construction could begin in the fall once a builder is chosen.

The goal is to have the community centre and arena finished and ready for action by the fall of 2022.