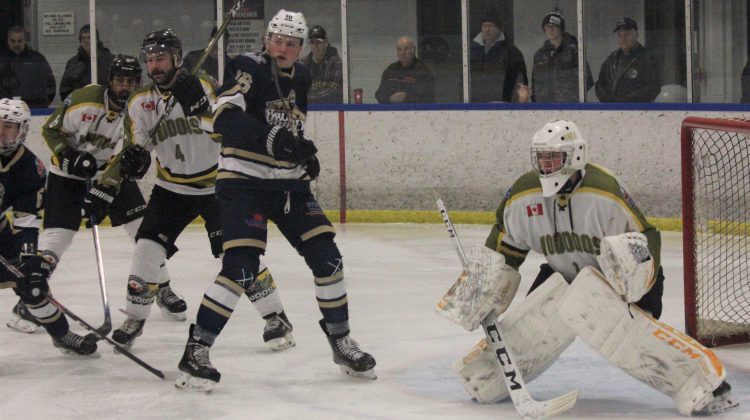 Voodoos goaltender Christian Cicigoi stands prepared for the Gold Miners as Eric Allair looks on. (Supplied by the Powassan Voodoos)

It’s been a while since we last caught up with the Powassan Voodoos, but there haven’t been many games.

In the time since the last article was published on January 10th, the team has played a total of two games, falling 4-1 to the Timmins Rock and taking a 6-4 victory over the Kirkland Lake Gold Miners.

“Every time you play Timmins, you know it will be a good contest,” head Coach Max Gavin said. “They’re a good team and so are we. It was a great game. In the first 30 minutes, we had our chances and in the next 30, they took advantage of theirs. It’s always fun to play those games because it’s a good measuring stick to see where you’re at.”

“We got back to work the next week at practice, and I think it’s showing in the game we have played since,” Gavin continued. “It takes some time and it is a process, but I think there is a lot of positives.”

It has been a strange schedule for Powassan since the holiday break. Starting back up on January 5th, the Voodoos played three games in six days. In the ten days since, the team has only played once, which was Tuesday’s win against KL.

That time was used to the team’s advantage however as in the game against the Rock, Powassan saw four affiliated players suit up due to player suspensions and injuries. In the game against Kirkland, they were able to ice close to a full roster.

“It was huge,” Gavin said. “Sometimes those things happen timing-wise and you look at the schedule and you wonder how it’s going to play out and sometimes it plays out in your favour. We had a couple of guys that were banged up and needed that week and it was good they could take advantage of it. It gave us time to work on things and reset.”

The reset looked to pay off early for Powassan as within 40 seconds they had a 1-0 lead and a 3-0 through the first 16 minutes of the first. However, the road got rocky as within a minute and a half the Gold Miners tied the game at three before the end of the first. The Voodoos would pull away in the third, however.

“I thought we came out good and were buzzing early,” Gavin explained. “I think what happens is you have too high of a high at the beginning, complacency can set in. They (KL) did a good job of getting back into the game. We exchanged some chances and we shut it down when it counted which was a good sign for us.”

After the 10 day layoff, the Voodoos hit the ground running this week with the previously mentioned game against the Gold Miners on Tuesday. Wednesday they head up to Kirkland Lake for the back half of a home and home, before welcoming the Cochrane Crunch on Friday and Timmins on Saturday.

For Powassan, every game is important, but as they now chase Timmins by (at the time of this writing) four points for first in the East, they have just a bit more of a playoff feel. Especially considering they have two games in hand (Powassan has played 38, Timmins 40), with the clash of NOJHL titans once again on Saturday.

“Every time you play the team you’re fighting for first with, that’s obviously what you’re looking at,” says Gavin. “Kirkland’s a tough game, Cochrane’s a tough game, French River, all of them. There’s not an easy game on our side with Hearst there too.”

“You have to come prepared every night,” Gavin continued. “I think what’s fun about that is it creates great competition night in and night out and it allows the guys to really improve. We’re looking forward to it and I think we will rise to the challenge.”

Even though Powassan has an “X” next to their name, meaning they have already clinched a spot in the postseason, the team is facing its first bit of adversity this season. With the schedule being kind, and giving the team a chance to catch back up before Saturday’s tilt, the time is now for the Voodoos.