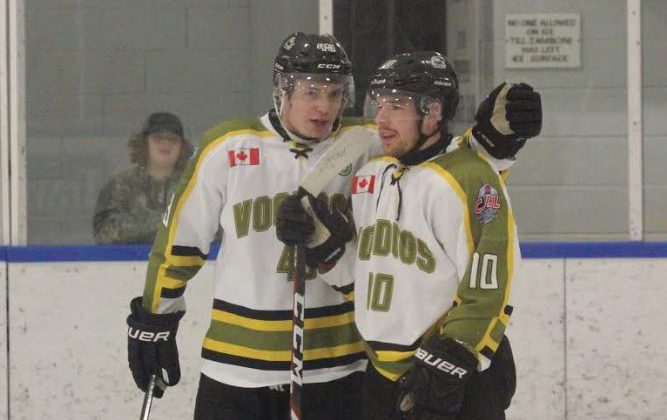 Tomas Yachmenev (10) celebrates one of his goals against French River alongside captain Parker Bowman. (Supplied by the Powassan Voodoos)

The Powassan Voodoos continued their winning ways over the past week.

Over the past few games, they defeated Kirkland Lake 5-2, and Cochrane 4-1 to catch up to Timmins in the standings, before taking a thrilling 1-0 victory over the Rock to retake the NOJHL lead.

Wrapping up the week, the Voodoos skated away with a blow-out 10-0 win over the French River Rapids.

“Sometimes when you have a big emotional win like the one we had over Timmins, sometimes the next game, no matter who it is, can be a tough one,” head coach Max Gavin said. “Credit to the guys, they came ready to play and finished opportunities they had early and took control and didn’t let off the gas. The guys came ready to go and they are the ones who score the goals and keep them out.”

Tomas Yachmenev, the son of former NHLer and North Bay Centennials star Vitaly Yachmenev, picked up eight points in the victory over the Rapids including five goals, with three shorthanded tallies. Not to be outdone, his linemate Seiji Martone picked up seven points for the second time this season and Owen Say now has back to back shut outs in net.

The game against Timmins really lived up to the billing of the two top teams in the NOJHL as the game remained scoreless until just under three minutes left in regulation. Ryan Mills picked off a pass from a Rock defender before passing it out front for Joe Whittet to tap it past Timmins goalie Tyler Masternak.

“Not to make excuses but we had a long week and a short bench,” Gavin explained. “It comes down to guys stepping up. They were incredible, and Owen was great and gave us a chance to win that game. With the talent we have, which is fortunate, the longer it goes, we just need that one opportunity and we finally got it.”

“Joe did a great job of finishing it off,” Gavin continued. “It’s a credit to the whole team. A really gutsy win. In games like that and playoff time, it doesn’t matter how it’s how many.”

Powassan will travel north on Friday to take on Kirkland Lake, before a rematch against the Rapids on Saturday in Noelville. The Voodoos can expect some highly motivated competition in those games as both teams are scratching and clawing for the final playoff spot in the East.

“There are some battles in our conference for seeding and home ice,” Gavin stated. “I expect a hungry and motivated Kirkland Lake team. We’re going into their barn and they play well at home. Same with French River, they’ve been coming in hot and they’re pushing for their first-ever playoff appearance so they will be hungry too.”

“The guys know, and it’s just coming ready to play every night at this point,” he continued. “We only have a month left of the season to try and position ourselves where we want to be.”