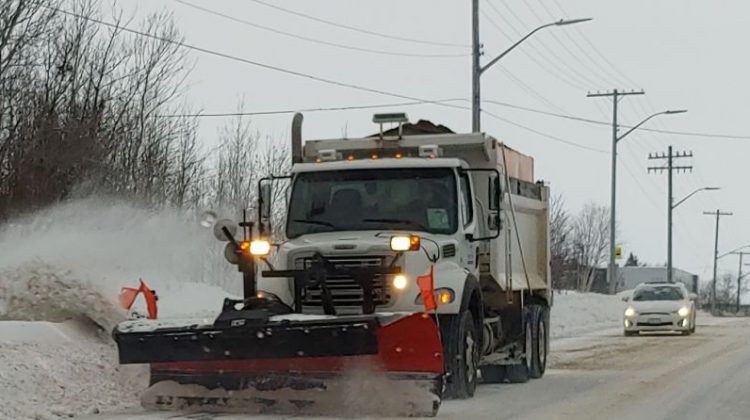 This file photo was taken at the height of the record-setting winter of 2019. (Stu Campaigne, MyNorthBayNow.com staff)

Every winter has its challenges but last year was a doozy.

“To compare this year to last year is like comparing apples and oranges,” said the City of North Bay’s Manager of Roads and Traffic Scott Franks.

The snowfalls and temperatures have been nowhere near as fierce as last year’s record-setting winter but there is still plenty to do for the hardworking men and women of the City of North Bay’s Public Works department.

“Obviously, the amount of snow accumulation we have this year is by far less.” Here, Franks pauses to knock on wood. “What that means for us is, in a year like last year, we were continually plowing and performing maintenance on our roads, internal staff and equipment are preoccupied.

“With a year like this year, the last three weeks, we have been fortunate to have the weather cooperating with us, that we can utilize our own forces to do snow removal. It’s a huge benefit for us.”

When it comes to winter maintenance, despite the best intentions of the powers-that-be, it is near impossible to completely plan ahead for the twists and turns the season can bring. But they can try. Good fortune goes a long way, especially when it comes to the finances of a large entity like the City of North Bay.

Unlike last winter, “We haven’t been forced into a position where we’ve had to out-source contractors, which is obviously an additional cost. We are able to perform the duties ourselves,” said Franks.

In 2019, the City of North Bay’s winter maintenance expenditures finished more than $800,000 in the red. When it came to road maintenance, Public Works crews and hired contractors removed more than twice the amount of snow from streets and sidewalks in 2019 than they had in the previous two years combined.

Franks was hesitant to say whether the savings from this milder winter would approach last year’s deficit. “Obviously, it’s going to help. So far our costs, as far as snow removal goes, are under half of what we spent last year.”

Due to the extreme freeze-thaw cycles this season, Franks said the sidewalks have been receiving more attention, as far as scraping and sanding, to improve pedestrian safety.

Snow removal crews have already cleared many parts of the city, with a focus on main and arterial roads and known problem areas. Franks said the work will continue this week and beyond in an effort to improve sightlines on main roads Algonquin Avenue, Lakeshore Drive, Cassells Street and McKeown Avenue, among others.

The crews work 4:00 a.m. to noon shifts, spending the first few hours on main roads while traffic is minimal before moving to quieter residential streets for the remainder of the shift. An emphasis is also placed on areas of the city in which storm sewer infrastructure is known to be problematic come spring.

Franks encouraged the public to report any safety concerns on area roadways to Public Works at 705-474-4340.