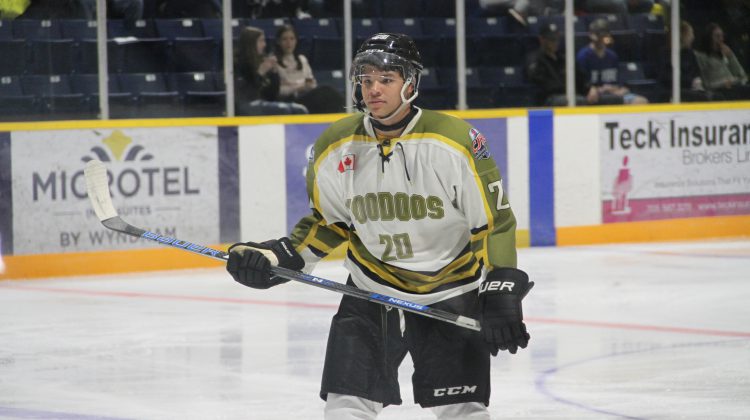 With the season winding down, the Powassan Voodoos embarked on a crucial three-game road trip up north.

For Voodoos head coach Max Gavin, who is rounding out his second season at the helm, the team has only swept the road trip north once. That came earlier this season. This time was no different, as the team took two of three, with victories over the Timmins Rock and Hearst Lumberjacks before falling to Cochrane.

“Those road trips are tough,” Gavin explained. “It doesn’t matter who you play. It’s a long trip, lots of bus time, and really tough teams. Those are the other top three teams in our conference that we’re playing back to back to back. To get four out of six points, obviously, you want six points, but two of three is solid and if we had another five minutes, I think we would have gotten it. The boys battled hard with a short lineup, and I’m proud of them.”

Even with that short lineup, all the games, including the loss against Cochrane, were determined by just a goal. They took game one 3-2 over the Rock, game two 5-4 over the Lumberjacks in overtime, before falling 3-2 in game three to the Crunch. However, Powassan found themselves down by at least two goals in each game.

“We started a little slow up there every game,” Gavin said. “We were down two goals every game and you never want to start behind. But at the same time, we showed a lot of resiliency in the first two games in fighting back and even in the third we were a shot away from tying it.”

“You have to take some positives when you’re in a three in three,” he continued. “It’s just finding a way honestly. The boys did a good job and we don’t want to start behind, we want to start ahead and we have done that for most of the year.”

On Wednesday the Voodoos hosted the French River Rapids for the final time this season. Powassan would go on to win the game 7-1, but in the first period, Gregory Trudeau-Paquet scored his 31st of the season. The significance of the goal is that it represented his 100th in the NOJHL.

“He’s a very talented hockey player for sure,” Gavin said. “He’s been a star in this league for his whole career and kudos to him, he definitely earned that one.”

The coming week will see the final regular-season visit of the Timmins Rock on Friday, before the last road trip to Noelville to take on the Rapids. Both games will be constituted as bigger games by the respective teams. Timmins holds a one-point lead on Powassan in the overall NOJHL standings, but Powassan holds two games in hand.

As for French River, it looked like the team was going to make its first playoff appearance in their five-year history. However, a recent eight-game losing streak has them three points back of Kirkland Lake for the fifth and final playoff spot with six games remaining. Short version, they will be hungry for the two points this weekend.

“We’ve got eight games left and every one counts,” Gavin said. “That Timmins game could decide first place and everyone knows what’s on the line when we play them. It’s always fun battles, almost every game has been decided by one goal. It’s going to be a battle and it’s going to be fun and one everybody should be ready for.”

“French River on Sunday is going to be a tough test,” he continued. “They play really well at home and it will be the last time we play them so they will be ready. They are still fighting for a playoff spot as well and I expect a battle every time we come to the rink.”