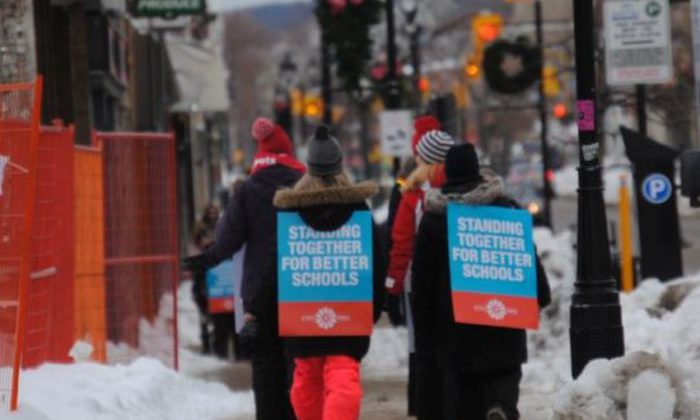 All public elementary schools under the Near North District School Board umbrella are closed Friday.

For students, the weekend will be sandwiched by the strike and Family Day, meaning students will not return to classrooms until Tuesday.

Unlike this past Tuesday’s province-wide job action, Friday’s Elementary Teachers’ Federation of Ontario strike will target only select boards, including NNDSB.

See also: Teachers: More cuts will spread us even thinner

Composite schools with intermediate students, such as West Ferris, Chippewa and F.J. McElligott, will remain open for high school students but will be closed to the grade 7 and 8 students.

Community use, along with childcare and family centres at the schools will continue as normal.

The ETFO bills itself as a union “committed to public education, social justice and equity,” representing over 83,000 elementary teachers and education workers across Ontario. ETFO president Sam Hammond accuses the government of not addressing critical issues and making a sham of contract talks that have been taking place sporadically for seven months now.

Meanwhile, on a day French-language member teachers from the AEFO walked out, closing schools across the province, Nipissing MPP Vic Fedeli issued the following statement:

“Continued escalation of job action by the teachers’ unions has gone on far too long. Students across the province are being hurt by the withdrawal of services and loss of classroom time. Parents expect all parties to meet at the negotiating table and have meaningful, student-centric discussions.

“We call on union leadership to continue to work with us, in good faith, to end these strikes, and focus on reaching a deal that keeps our students in the classroom where they belong.”

All of Ontario’s students will be out of school next Friday, February 21. The unions are banding together for a one-day job action, with 200,000 teachers and education workers hitting picket lines, closing 72 school boards and 5,000 schools.