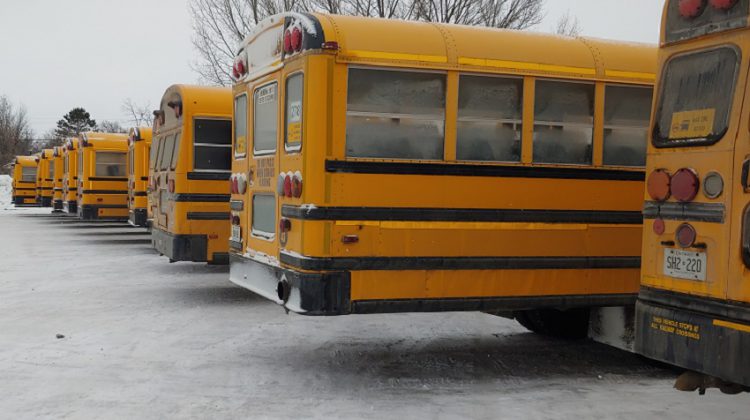 Some of the new school buses joining the fleet in the Sudbury District will come equipped with seatbelts for their young passengers.

While the Ranger family from Mattawa continues to fight for stop-arm cameras to become standard on school buses, our neighbours to the west are doing their part for the safety of the precious cargo on board.

This, according to a federal safety task force which endorsed the district for a safety pilot project after receiving an expression of interest from the Sudbury transportation consortium.

Executive Director of the Sudbury Student Services Consortium Renée Boucher said the consortium “is thrilled to be working in partnership with Transport Canada on this very exciting project to support school bus safety. We are looking forward to working with our local school boards, school bus operators, students, and parents on this very important initiative.”

The federal government has launched the project to introduce three-point seatbelts in some of Sudbury’s new school buses. Minister of Transport Marc Garneau said it will involve a limited number of new school buses and will follow the latest federal safety standards.

“School buses continue to be the safest means of transporting children to and from school in Canada, but if there is an opportunity for improvement, we will explore all options as we continue to study and analyze the potential use of seatbelts on school buses,” said Garneau. “These pilots are an important element of our collective efforts to further strengthen school bus safety in Canada, and we look forward to the findings.”

The seatbelt project slated to begin this spring in Sudbury will be the first in Canada, while officials say a second test site will eventually be selected in British Columbia. The Government of Canada said it “is also open to partnering with other governments or jurisdictions who would be willing to step up and participate in a pilot.”

According to the Ministry of Transportation, “School buses are the safest way to transport an estimated 2.2 million Canadian children to school. Recognizing that seatbelts can provide an additional layer of safety in rare, but severe school bus collisions, these pilots are an important step in examining the optimal and most efficient use of this safety feature in Canada.”

The need for the pilot projects stems from the task force’s report. Strengthening School Bus Safety in Canada “explains the considerations associated with installing and using seatbelts on school buses, such as proper seatbelt adjustments for children.”

In January 2019, the task force was asked to carefully examine the issue of school bus safety, both inside and outside the bus, with an emphasis on seatbelts.