ETFO cancels strikes for the next two weeks 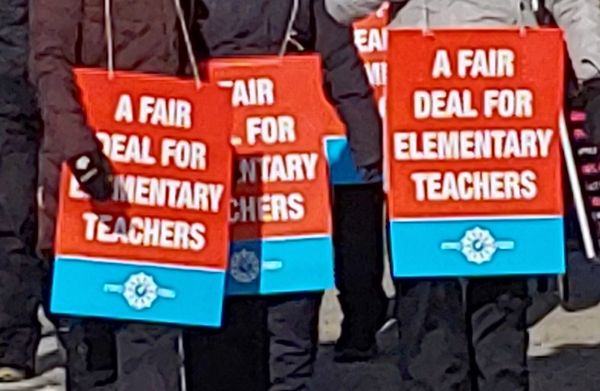 ETFO has suspended strikes for the next two weeks. (Stu Campaigne, MyNorthBayNow.com staff)

Parents of elementary students at the Near North District School Board will have a reprieve from strike action.

The Elementary Teachers’ Federation of Ontario (ETFO) announced it would be suspending all rotating strike action for the next two weeks. The union says it is refocusing its energies on putting pressure on the Ford government and is putting them on notice of its intention to further escalate job action after March 6.

The union adds if there is no agreement in place by March 9 they will go forward with phase seven of its job action campaign, although it is unclear at this time what that entails, however, ETFO president Sam Hammond says everything is on the table, including a full strike.

“We are putting the government on notice that if there is no agreement over the next two weeks elementary educators across Ontario will without hesitation initiate further strike actions,” he explained. “I hope I don’t have to come back and talk about phase seven. I hope what happens is that we actually get back to the table and that we actually get a deal.”

Hammond says, ETFO members will be holding pickets outside of their schools for at least 20 minutes each week. Educators will also be writing to MPPs and Education Minister Stephen Lecce about the importance of investing in education.

Meanwhile, Lecce says the government hopes these measures by ETFO will not affect the safety of the students.

“The safety and security of our students are of the utmost importance to this government,” he said. “I hope that ETFO will work with school boards to ensure that the escalated work-to-rule measures do not risk student safety and security. That is why our government is squarely focused on getting a deal that ends the continuous escalation by teachers’ union leaders, so our kids remain in class.”

“Our government wants to see investments in education helping our students, not increasing compensation and enhancing already generous benefits packages,” he continued. “I remain fully committed to reaching a deal that keeps students in class, provides certainty to parents, and fairness to educators.”

Schools that will now go without strike action include:

During previous strike days, composite schools with intermediate students, such as West Ferris, Chippewa and F.J. McElligott, had remained open for high school students but were closed to the grade 7 and 8 students.

ETFO had been holding one-day strikes since mid-January.