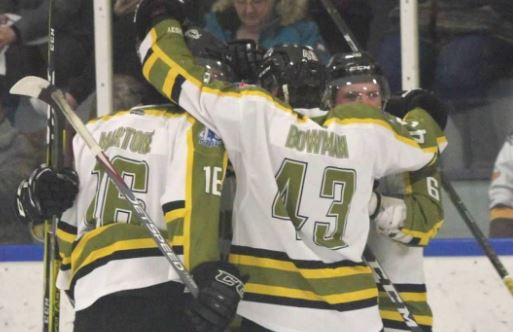 The Voodoos celebrate a goal against the Timmins Rock. (Supplied by the Powassan Voodoos)

The regular season is over, and the Powassan Voodoos stand alone at the top.

“The boys did an unbelievable job from start to finish,” head coach Max Gavin said. “When you set out, especially with the roster we saw forming, you set goals as a team and as a staff and one of our goals was to finish first in our conference, and the cherry on top would have been first in the league. To accomplish both of those is huge because it shows when you stick your mind to something, you can get it done.”

“A lot of credit to the players,” he continued. “They grinded, especially in the second half to get a lot of hard-earned points, a lot of three in three, four in five, and a lot of adversity. It’s a credit to everyone from ownership down, our scouting staff, the players, everybody.”

Gavin isn’t wrong when he points out the grinding part. Since the Christmas break, the team has struggled to ice a full roster some nights. Mostly because of some injuries, but sprinkle some suspensions in there as well and it almost becomes a mini-training camp with a lot of call ups in January/February when teams are pushing towards the playoffs.

“I think it goes to the players we have here,” Gavin explained. “It’s a family here, the boys grind and work every day and they want to win for each other and it’s a special group, but it’s a credit to our affiliate players who come up and are fearless and chip in when needed and have had an impact.”

“This is an opportunity for them to showcase what they can do potentially for us or other teams in the league for next year,” he added. “But it really is a credit to the players. I can’t say enough about them, they are all incredible young men and they put in a lot of work day in and day out to earn what they have so far.”

To round out the regular season the team finished seventh in Canada on the CJHL’s top 20 weekly rankings, while defender Jacob Peterson-Galima took home an NOJHL star of the week and defenceman of the month honours. Not to be outdone, star netminder Owen Say took home goaltender of the month as well.

Say finished his first season in the league with 31 wins, and two losses. He finished third in the league with a 1.90 goals-against average, and first with a .941 save percentage, including a .951 in February. Taking home the goalie of the month honour four times in the six month season, Say also set a Powassan single-season record with his 31st win of the season. The record was previously held by Nate McDonald with 30 in 2016/17.

For Say, the season started out as a tryout in the middle of August’s training camp, before resulting in a trip to the World Junior “A” Challenge in British Columbia.

“I can’t put it into words, he has been incredible,” Gavin said. “He’s an incredible young man and he deserves everything he has gotten this year and has earned every bit of success he has had. He comes to practice with a pro mentality, battles for every puck and is always prepared.”

“As we can see with his numbers, I think it is a good message to kids,” he added. “He came up on a tryout, no guarantees, no promises, it was just an opportunity and he has turned it into Team Canada East, a Voodoos record for wins and one of the better seasons a goalie has had in this league, I would think.”

It will have been almost two weeks for Powassan by the time the clock hit zero against Espanola on Sunday, to when puck finally drops in their playoff matchup against either the Cochrane Crunch or the Kirkland Lake Gold Miners. The two teams finished fourth and fifth in the East respectively and will play a best of three playoff series to see who will play the Voodoos.

“I think it is always beneficial to get a little bit of rest this time of year,” Gavin said on the lay-off. “It gives us an opportunity to get back to basics for a week and once we know who our opponent is, then we can focus in off of our basics what we need to do to be successful.”

“I think for us, we try to play our game and within our system what can we do to be successful,” Gavin continued. “You’re not going to try and reinvent the wheel this time of year. The guys know what they need to do to be successful. It’s been working so why would we stray away from that? That being said, there are little adjustments we can make within our system to give us more success against a certain opponent and we will do that with video and practices.”

As baseball legend Derek Jeter once said, the regular season is just practice for the playoffs. The Voodoos had 56 practices, it’s time to show off what they have learned.