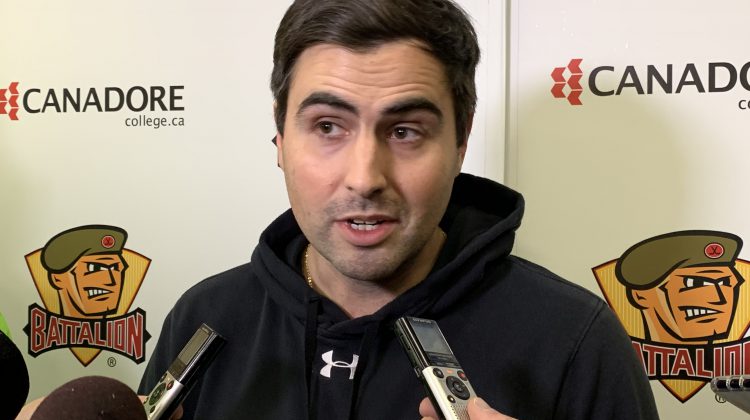 The 2020 OHL Priority Selection is over, and with it, the North Bay Battalion has seen some new faces join their ranks.

Starting with the first overall pick in the draft, the Troops took Ty Nelson. North Bay had to sit around for 29 picks before selecting Dalyn Wakely.

“Coming into the draft, we knew it was going to be a deep one,” Battalion General Manager Adam Dennis said. “We came into this with eyes wide open, and it was a long wait from one to 30 but we really felt there was going to be someone special at 30. Dalyn Wakely is a guy we didn’t think was going to be there at 30, but we’re happy to get him.”

“The consensus was that the two best teams were the Toronto Jr. Canadiens and Quinte Red Devils,” he continued. “We feel like [with Nelson and Wakely] that we got the best player on both of those teams now. I think this is a very deep draft and we will all see that in a couple of years.”

North Bay didn’t have to wait nearly as long to make their next selection, as with the first pick of the third round, they selected Tnias Mathurin, before wrapping up the top five with Owen Van Steensel and Michael Podolioukh, both in the fourth round.

“Mathurin is a big physical defensive defenceman with some offensive ability and is a guy that can step in right away,” Dennis explained. “Van Steensel played for a former teammate of mine, Dan Syvret, was tied in points with Hunter Haight who went in the top 10 [ninth overall to the Barrie Colts]. Padolioukh played with the Jr Canadiens and played in a lot of big games and was taken later than many of the experts would have said.”

A theme this year for the Battalion is the top four selections all wore a “C” or “A” on their jerseys with their previous clubs before being taken by North Bay.

“They’re good players already, and we know the ceilings for those guys are all pretty high,” he added. “The pressure will be off as 16-year-olds coming into our dressing room that has leaders already. They have the opportunity to learn from a guy like Luke Moncada. He’s an extension of our coaching staff because he plays the right way, and he’s not afraid to let his teammates know when they need to be better and it’s a great thing for a young guy to come in and see that model.”

Here’s a break down of all North Bay’s selections: