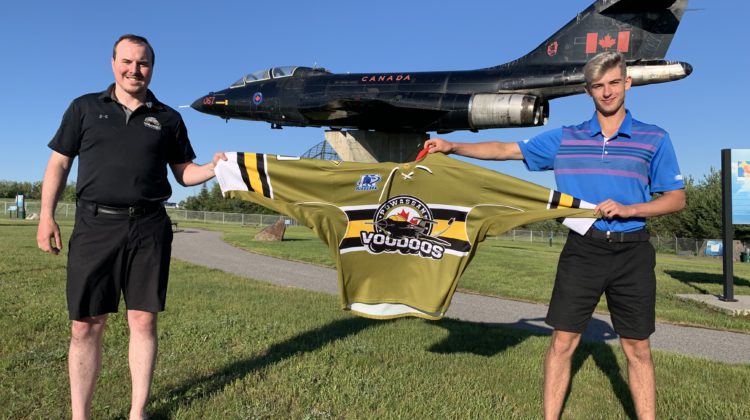 A familiar name is returning to the Powassan Voodoos.

Netminder Owen Wray, the son of former Powassan head coach Scott Wray, has been signed by the team. Wray spent the 2019/20 season with the North Bay Midget AAA Trappers and posted a 2.74 goals-against average. A 15th round pick in the 2019 OHL Priority Selection by the North Bay Battalion, Wray suited up for one game as the backup as well.

Wray’s father, Scott, was the first head coach in Voodoos history and guided the team to an NOJHL championship in 2017.

“It is a real honour, it was really fun as a kid being around all the players and being the team that they are, it was always welcoming and family-like,” said Owen.

Max Gavin, the Voodoos head coach, and assistant general manager is excited to add another talented young netminder to the Voodoos organization.

“I think it is a huge signing. I think the first thing that stands out is his athleticism and definitely his dedication to the game,” said Gavin.  “He was one of the top goalies in the north, if not the top and probably one of the top midget goalies in all of Ontario so we are lucky to have him. Obviously, with his dad, it is a nice cherry on top but he definitely earned this on his own and I think he should be very proud of that.”

“Owen is an athlete and what we like about him is his competitiveness along with his athleticism,” said Dawson. “He kind of reminds me of a young Garrett Forrest. We are excited to have him.”

As for the impending season, Voodoos officials say they are waiting for direction from Hockey Canada, the OHF and the NOJHL as to when the 2020-21 season is set to begin.