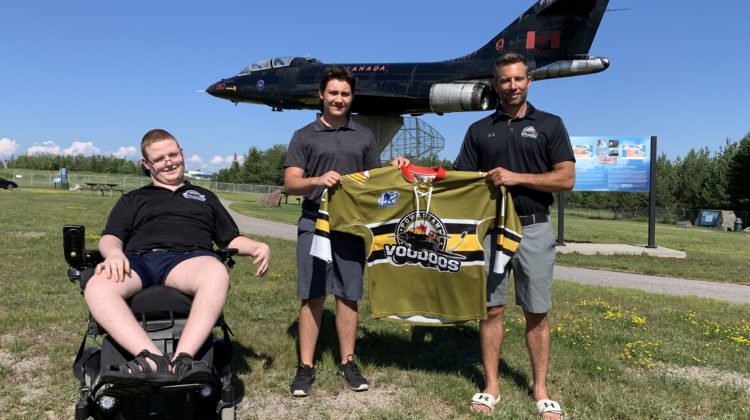 The Powassan Voodoos off-season is underway and in normal times players being moved around and signed all across the Northern Ontario Junior Hockey League (NOJHL) would be expected. But these are not normal times.

“It’s been a very unusual season to say the least. Normally, this time of year, it’s a really busy time. We’re in talks with various clubs, signing and moving players and as of right now, most teams, including the Voodoos, are focusing on signing recruits out of Midget.” He said.

And that’s exactly what the process has been like for the team who announced today that their first forward signing of the season was one that was close to him; North Bay local Ben White.

White had a big year in the Great North Midget League last season, as he and netted 19 goals along with 31 assists for 50 points in 38 regular season games playing for the New Liskeard Cubs. White also played five games as an affiliate player for the Voodoos last season.

White was honoured to join the Voodoos for the 20-21 season.

“It’s pretty cool to end up playing for the Voodoos as I have been watching them since I was in Atom, so 11 or 12 years old,” White reflected. “I remember always thinking how awesome it would be to play for this team, and now that the moment is here it is pretty exciting and I am thankful for it. I really like how fast and intense the hockey is and how the little things really matter.”
Dawson says hockey operations was impressed with White when he was a call-up last season.

“We like the energy and enthusiasm that Ben brings to the rink every day,” said Dawson. “He had a great season with the Cubs and we are hoping that transitions to the Voodoos in 2020-21.”
The Voodoos are still waiting for more direction from Hockey Canada, the OHF and the NOJHL as to when the 2020-21 season is set to begin.

Though the future is uncertain, the past is cemented with the Voodoos finishing first place in the regular 19-20 season boasting 45 wins and only 9 losses.