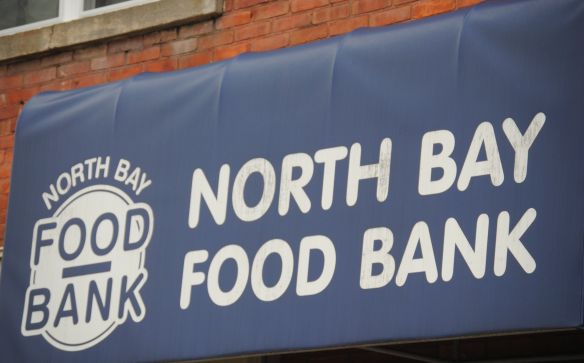 The North Bay Food Bank will be receiving money raised by the two RONA stores in the area as part of a national fundraising initiative by Lowes Canada. (Stu Campaigne MyNorthBayNow.com staff)

Food banks provide a valuable service for people who may struggle to afford a trip to the grocery store.

Despite being able to help its clients facing food insecurity since COVID-19 hit, Debbie Marson, Executive Director of the North Bay Food Bank says that it will need the community’s help to continue weathering the storm.

“It’s important to know that we don’t know what’s coming next when it comes to COVID. There might be a second wave that’s coming and we really need to keep relying on the support of the community to make sure we’re ready for that,” said Marson.

The Food Bank has altered its system to adhere to public health guidelines. Clients now have to line up and pass through stations where volunteers fill up their bags, maintaining physical distance and minimizing the number of people touching items. Marson says that nobody was left out when the pandemic hit.

“We were fortunate that we were able to act quickly when COVID came in. We changed our processes right away and still deliver(ed) the services that we needed for our clients. No one didn’t receive their hamper because of COVID,” she said.

A study from the Daily Bread Food Bank on Toronto food banks found that over three-quarters of new clients experienced food insecurity because of job loss. It also found the rate at which kids were going hungry rose from one in four to one in three children.

Marson is hoping that COVID-19 has shone a light on the issue of food insecurity in Canada.

“I think it’s gotten a lot of traction with the messages that were being put out by the government at every level and our affiliate membership with Feed Ontario and Food Banks Canada. This isn’t a new thing – this food bank is 35 years old. There’s been food insecurity for many years and I think now people are really realizing what that entails,” she said. “I can’t think like a politician. I don’t know what their plans are when it comes to taking a look at what’s really happened in four months of COVID and what food insecurity looks like. Maybe it’s time to realize what a necessity we are and have that support. I would hope so at least.”

Marson adds that there hasn’t been a significant drop-off in the amount of food that’s been donated to the Food Bank.

“Not on the community side of things. People were still coming in and dropping stuff off on a regular basis and they still are. We did notice a decline in donations we received from our retail outlets in our blue collecting bins, mostly because people weren’t going out as often or they were doing online shopping,” she said, adding that monthly financial donations greatly help the Food Bank.

If you’re looking to donate in the near future, Marson says the Food Bank’s Food of the Month for August is canned beans.

“That’s the one item that, if you’re going to buy something, that’s what we’d like you to buy to support us.”