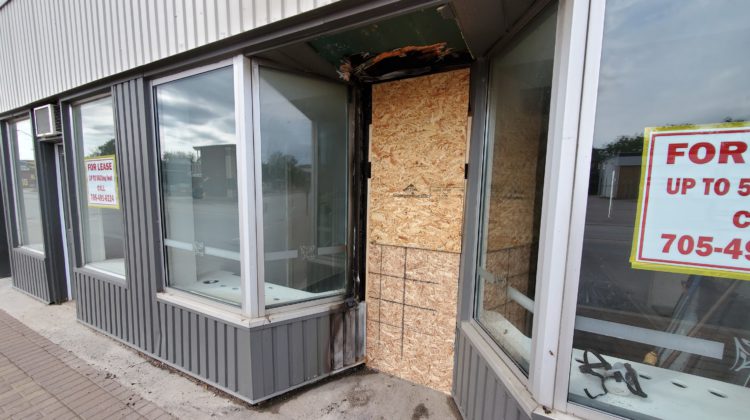 The aftermath of a fire the North Bay Fire and Emergency Services responded to on July 22. (Brad Aubin, MyNorthBayNow.com)

Charges have been laid in an arson investigation after a fire in downtown North Bay.

On July 22nd, North Bay Fire and Emergency Services were alerted to a fire that was started in a garbage can and pushed close to a building on Main St. Firefighters arrived quickly enough that there was no significant damage to the building.

At the time of the fire, investigators said the case was “clearly arson.”

The North Bay Police Service (NBPS) arrested a 55-year-old North Bay man on Thursday and issued one charge of arson.

Chief of the NBPS, Scott Tod commends the joint effort of the city’s emergency crews.

“There is an excellent working relationship between our police and the North Bay Fire and Emergency Services in keeping our community safe. NBFES’s prompt response contained a dangerous situation and our officers conducted a thorough investigation resulting in an arrest. I also encourage the public to work with and support police as we remain committed in preventing and investigating crimes to keep our community safe,” Chief Tod said in a statement.

The accused is in police custody awaiting a bail hearing.