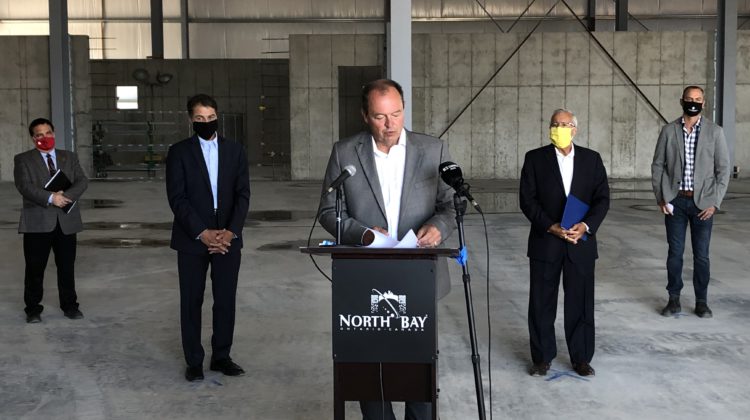 Between 45 and 50 jobs will be coming to North Bay this fall courtesy of a galvanizing plant currently under construction.

Norgalv is a company that was created through investments from all levels of government which will build a galvanizing plant to service all of Northern Ontario.

Andre van Soelen, Managing Director of Norgalv and part of a group of South African investors, was looking around the world for locations to build the plant.

“I can honestly say that the decision to locate in North Bay was made easy due to the hard work, drive, and assistance from all levels of government,” van Soelen said.

The City of North Bay has helped the process by covering $70,000 in building permits. Nickel Belt MP Marc Serre also announced that the federal government has issued a $1.5-million repayable loan through FedNor, with the provincial government also pledging $5-million through the Northern Ontario Heritage Fund.

The galvanizing plant will be the only of its kind in Northern Ontario, providing a valuable service for the mining industry which employs over 25,000 people. Van Soelen says that his company’s work will also serve industries beyond mining.

“People that would manufacture standing structures for the agriculture industry or vineyards would never consider building in North Bay because all of their structures have to go 400 kilometres to the next galvanizing plant,” he explained. “Having a galvanizing plant; having that product – whether it’s used in Northern Ontario or not doesn’t matter – it can be manufactured here and now that we have a plant, it can be exported from here.”

Van Soelen adds that his facility will also be environmentally conscious, saying that it will be emissions-free and produce zero wastewater.

Fedeli thinks that Norgalv’s establishment in the area could lead to more international businesses coming North.

“We should be looking at what kinds of products that are expensive to ship that we could galvanize here. That’s why it’s so important to make this investment. This is like the hub investment you make to bring in other businesses,” the MPP said.

The plant is estimated to be complete by the end of November after construction began in 2019. Van Soelen says that at least 45 full-time jobs will be needed to operate the plant, potentially reaching 50.