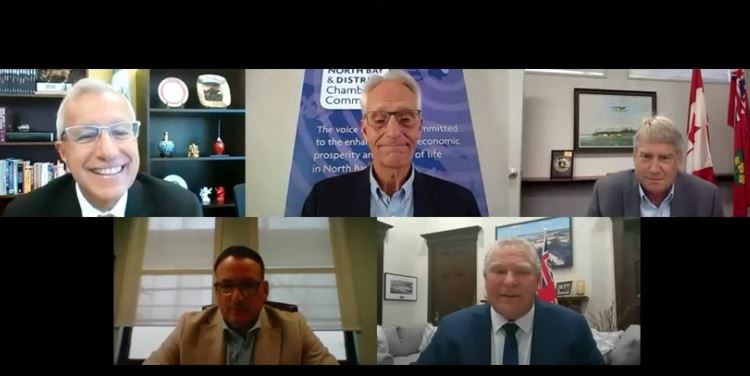 The Northern Ontario Town Hall took place over Zoom on Monday (Photo supplied by North Bay and District Chamber of Commerce, YouTube)
A first-of-its-kind virtual Northern Ontario Town Hall meeting provided chambers of commerce and residents across northern Ontario the chance to directly question the provincial government.
Monday’s event featured Nipissing MPP Vic Fedeli, Kenora-Rainy River MPP Greg Rickford, Parliamentary Assistant, Norm Miller, members of various chambers of commerce as well as Premier Doug Ford.
One of the many topics discussed was the governments re-opening strategy. Ford praised northern Ontario for its small number of COVID-19 cases.
“For a geographical area as large as we see in the north, to have [low numbers], that’s incredible. It speaks volumes to the leadership in your communities.”

Peter Chirico, President of the North Bay and District Chamber of Commerce (NBDCC) and MC for the town hall, says that he was glad to have the premier involved in the discussion.

“We were very pleased and thankful that we’re able to get the time with the premier. Usually, we have a minister’s meeting or a round table with one of the ministers but centralized and located strictly for Nipissing,” Chirico explained.

While Ford did commend the region for its handling of COVID, he also emphasized his government’s goal of ‘removing red tape’ for businesses to be able to operate. Chirico echoes the premier’s goal.

“The recovery is going to take time. We don’t know what it’s going to look like in the next couple of months given some of the challenges that we have with COVID. But certainly, they are going to do everything in their power to reduce any hurdles or barriers to the business community, or try to, to make it easier to do business in Ontario.

The current provincial government has four ministers from northern Ontario:

Chirico says that the representation of northern Ontario among Ford’s team has been crucial.

“We have a really strong voice at Queen’s Park. Those [ministers] continue to push forward and enable us to do our jobs better as chamber members with their support and their fighting for us right across the entire spectrum of what we need in northern Ontario. We have challenges in Northern Ontario that aren’t seen in other parts of Ontario,” he said.

Overall, Chirico believes that the town hall accomplished what it was intended to do.

“We couldn’t ask for better communication or message from Queen’s Park,” he finished.