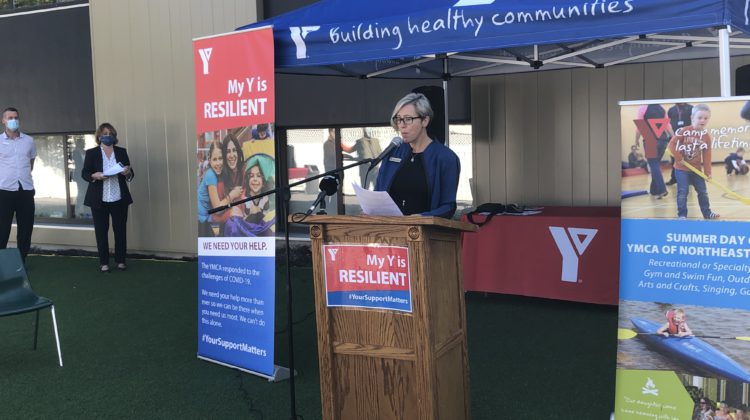 Helen Francis, President and CEO of YMCA Northeastern Ontario during the 'My Y is Resilient' kickoff event (Photo by Greg Bowman, MyNorthBayNow Staff)

The YMCA in North Bay is asking the community for support after suffering revenue losses due to the pandemic.

The “My Y is Resilient” campaign will be running over the next few weeks with the hopes of raising $1 million for the organization. The campaign was kicked off at the North Bay YMCA on Wednesday and featured presentations from past and present members of the board, community members and donors.

Helen Francis, President and CEO of YMCA Northeastern Ontario says that the facilities in North Bay and Sudbury have collectively lost around $3 million in revenue because of the pandemic.

“We don’t want to run a deficit. In addition, we have a cash flow crunch that we can foresee coming because we’ve had a lot of fixed costs since we’ve locked down that we still need to pay,” she said.

The YMCA in North Bay has recently reopened to the public after running some virtual programming over the last few months.

Francis says she anticipates the YMCA will be seeing financial difficulties for up two years after the pandemic. She adds that this is the first time that the YMCA is asking the community for support since its aquatic centre was built 20 years ago.

“We’ve been pretty proud of ourselves that we’ve been a largely self-sufficient organization with the exception of those capital campaigns,” Francis explains.

Nicole Beattie, Vice President of Philanthropy, Marketing and Communications for the YMCA is confident that the community support that North Bay showed two decades ago will help save the facility now.

“When the Y asks for help, people really come together,” she noted. “I have no doubt that North Bay will come together and be as generous as ever to help our YMCA thrive in and past COVID.”

Beattie’s presentation during the campaign kickoff outlined her family’s story of her younger brother being diagnosed with leukemia during their childhood. Beattie explained that her family considered cancelling their YMCA membership, but the facility elected to cover the costs.

“What people don’t see is that there are families who are in a very difficult state whether that is their health or their income – the Y is a second home to them. Their children feel comfortable and safe here. We have kids where the very first friendship they make happens here,” she explained, adding that about a quarter of current members rely on financial support for their memberships.

Beattie says that the North Bay branch has retained around 68 percent of the memberships it had prior to the pandemic. She adds that some members have converted their membership fees into direct donations to the YMCA.

The campaign kickoff also had Heiko Leers, the husband of Helen Francis, announce that he will be contributing $100,000 to the cause.

“When (Helen) became CEO a few years ago, I realized everything else the Y does, and it was more about what they would stop getting done if they didn’t have the money. I didn’t understand they had daycare facilities all over northern Ontario. I didn’t understand the immigration services. I thought it was just a fitness facility,” he recalled. “I thought I would make a donation that would make a difference.”

The YMCA childcare facility has over 150 children registered, making it one of the biggest daycare providers in the city.

So far, the northeastern Ontario YMCAs have raised $400,000 through the My Y is Resilient campaign.

Both Sudbury and North Bay have individual goals of raising $1 million each, with donations to either facility staying in the respective city.