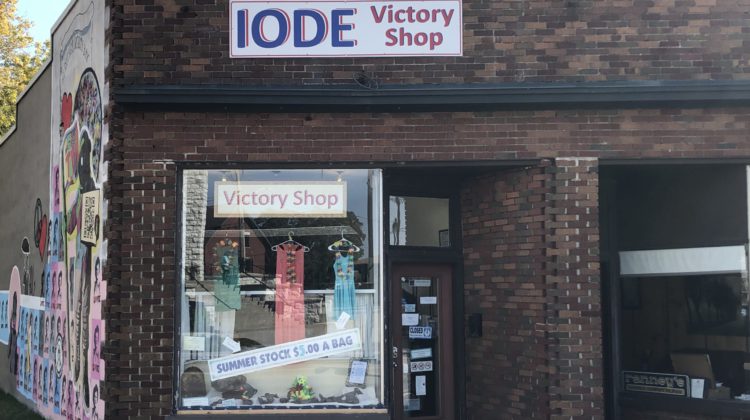 Local teachers will be able to pick up books for their classrooms on October 3 outside the IODE's Victory Shop (Photo by Greg Bowman, MyNorthBayNow staff)

The IODE of North Bay will be holding a book drive to support local teachers in the area.

Pat Moulson, Communications Officer for the IODE is a former teacher herself, whose daughter-in-law is a kindergarten teacher in Peel Region. Moulson says that she has great sympathy for elementary teachers who are returning to the classroom during the pandemic.

“Maybe if we do something to say ‘we’re thinking of you’, it could be the little bit of encouragement that they need right now,” she said.
Moulson notes that donations to classrooms are valuable, especially during the pandemic.

“Every school is scraping the bottom of the barrel in terms of money because of all the new equipment and so on that they’ve had to put in,” she said.

On October 3 (October 4 as a rain date), the book drive will take place outside the Victory Shop on Algonquin Street. Moulson says that any elementary school teacher in the area is welcome to come and take up to 10 books, with the possibility of more depending on the interest. COVID-19 protocols including face masks and physical distancing will be in place.

Moulson says that the IODE has collected 374 books through the community and North Bay Public Library “We would love to get to 400,” she encouraged.

Moulson says that the IODE has slowly been getting involved in its usual charitable activities since the province has begun to reopen from the pandemic. The Victory Shop is a second-hand store run by the IODE which Moulson says is relied upon by North Bay’s low-income community.

The IODE in North Bay was established in the 1920s as the Imperial Order Daughters of the Empire.

The Victory Shop will be accepting donations of the books for kids between the ages of 4 and 12 (kindergarten to Grade 6) until the day of the drive.