Capitol Centre Lights Up in solidarity with hurting industry 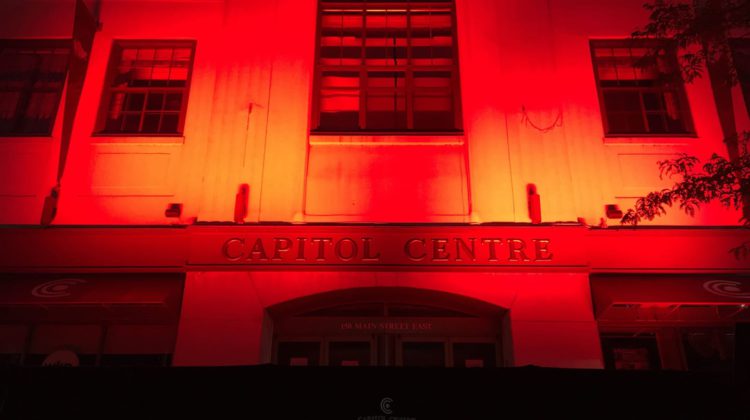 The Capitol Centre was lit up in red on Tuesday as part of the Light Up Live demonstration done by theatres and live entertainment venues across Canada (Photo supplied by Capitol Centre, Facebook)

On Tuesday evening, the Capitol Centre was lit up in red in solidarity with theatres across Canada to let people know of the hardships the live entertainment industry has suffered through the pandemic.

Caroline Parnell-Barry, Marketing Director for the Capitol Centre, says that the two-hour act of solidarity drew the attention of passersby.

“From a local perspective, mission accomplished,” she beamed. “We were among the first to close and we’ll probably be the last to open. So, we just want people to be aware of what we bring to the table and how they can help.”

The Capitol Centre normally holds between 22 and 30 shows a year at its venue, which also mobilizes other businesses in the area with the need for concessions and other services.

Parnell-Barry wants to stress the importance of the 90-year legacy the Capitol Centre has in North Bay.

“People come here for not only live theatre and bands and various entertainment; they come here as well for their graduations, for weddings and for community events,” she explained. “It feeds the soul.”

With the pandemic, the Capitol Centre has been renting out the venue to hold virtual concerts that have been live-streamed on Facebook. The theatre held a virtual concert series throughout the summer which featured a different local artist every week, also providing an opportunity for viewers to donate.

Parnell-Barry says that the purpose of those online events was to keep the Capitol Centre in people’s minds. She adds that the venue is looking at new ways to bring in money.

“We are looking at different sources of revenue like renting out the facility for streamed events,” she said. North Bay Pride rented out the Capitol Centre for its festivities this past weekend. “That is revenue in our pocket that will help us get to the other end.”

The Capitol Centre is planning to hold reduced-attendance events in the new year, in addition to fundraising drives in the coming weeks. Parnell-Barry is hoping that the venue will be able to capitalize on anything it can.

“We’re not swimming, we’re treading water and hoping we make it through to the other side,” she cautioned.

In Ontario, Parnell-Barry says that the live entertainment industry employs around 286,000 people, generating $25 billion in revenue, or 3.3 per cent of the province’s GDP.