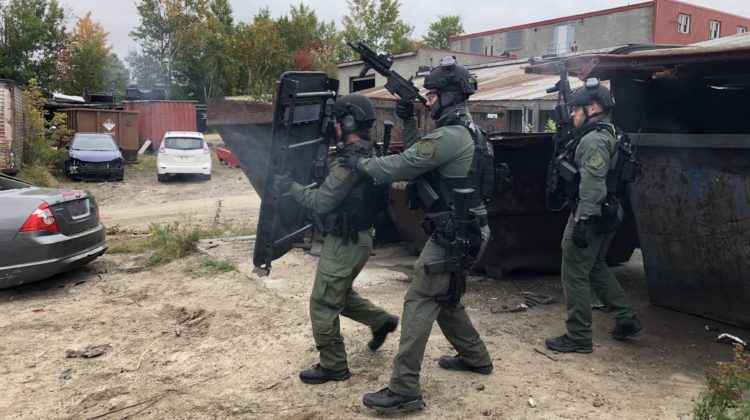 Members of North Bay's Emergency Response Team during a training drill for removing someone from a vehicle at a local auto scrap yard. (Photo by Greg Bowman, MyNorthBayNow Staff)

The North Bay Police Service has been training its Emergency Response Unit this week, hoping to make up for lost time from the pandemic.

Staff Sergeant Mike Hunter says that in the early stages of the pandemic, all police training was put on hold.

“We’re required to do yearly maintenance training and that includes 10 days of training for the team a year, we’ve got all of our qualifications for the weapons and we have all the qualifications in relation to the techniques we use,” Hunter explained, adding that his team is “catching up” from lost time earlier in the pandemic.

Friday’s training exercise, which took place at an auto scrapyard in North Bay, had the Emergency Response team outfitted in armour, helmets and assault weapons practicing how to enter a vehicle in an emergency. During the drills, one officer would shoot a projectile at a car, with another officer forcing the door open with a police shield.

Sergeant Hunter says that Friday’s focus was to practice retrieving a suspect or victim from a vehicle in an emergency situation, which is one of many situations the Emergency Response Team may find itself in.

“We range between 25 to 50 calls a year. But we do everything from executing search warrants, high-risk arrests, vehicle stops, dealing with high-risk emotionally disturbed persons to search and rescue,” Hunter said. “We’ve got a large gambit that we get involved in so we’ve got to do a lot of cross-training.”

As for the officers who are a part of the team, Sergeant Hunter says that it is one of many duties they have.

“The Emergency Response Team is a bit of a part-time unit in the sense that each one of them has a particular unit that they’re working their regular duties for. And then if an emergency comes up, they get called from those duties, dressed in their tactical gear and respond from there. It’s over and above what they’re normally doing,” he said.

The Emergency Response Team has been running training exercises throughout the city all week, including a drill at the North Bay Regional Health Centre on Thursday.