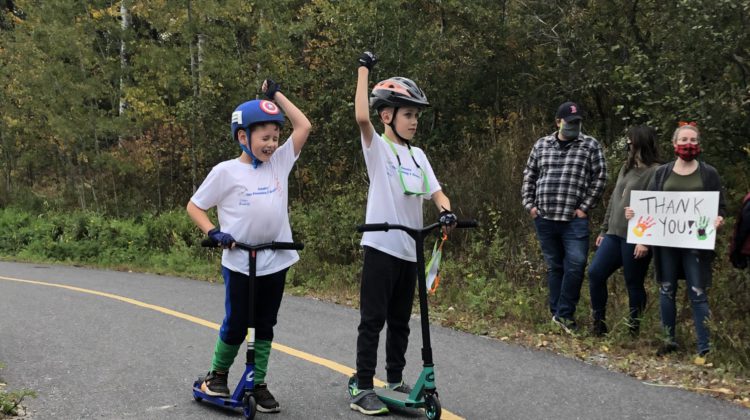 Edward (left) and Vincent (right) Pardy being greeted by supporters at the end of the Kate Pace Way trail in Callander (Photo by Greg Bowman, MyNorthBayNow staff)

Seven-year-old Edward and 10-year-old Vincent Pardy are brothers whose father, Jason, has been taking the two for scooter rides along different parts of the Kate Pace Way trail.

“We drove somewhere different one Saturday morning and I was like, ‘we should just do the whole thing’,” Jason Pardy recalled on how the idea for the marathon-ride was hatched.

Since May, the Pardys have been tackling different sections of North Bay’s trails once or twice a week. Jason says that his family made a map to mark off the different areas of the trail, with the goal to complete the 19.4 km length of the pathway.

Jason began documenting the boys’ journey on Facebook, posting pictures and videos in a group that he made up. During one of the videos, the youngest Pardy, Edward, said something which Jason says he learned from watching YouTube videos.

“My son in a video said ‘make sure you check out our new merchandise that’s coming’,” said Jason. The Pardys did not have any merchandise at the time.

“I got a bunch of phone calls and text messages from family and friends saying we should make up some shirts,” he explained, which prompted him to begin making T-shirts for the ride.

Jason Pardy says that the “whole thing snowballed from there” with people ordering the shirts that he had made up. He and his boys then decided to donate the proceeds to the Hands Family Help Network.

On Sunday, Edward and Vincent completed their journey, scooting the final 2.2 km of the Kate Pace Way trail in Callander, being greeted by supporters, firefighters and members of Hands.

Dr. Karen Miscio, the Senior Manager of Autism Services with Hands says that she and the organization are incredibly happy with what the Pardy boys have done.

“Especially during this time, we’re always trying to look at the negative of things. I have to say, kids have really stepped up lately. This is a really good example of that – the ability to just set a goal, the initiative to just drive for it, something they’ve been accomplishing since May – it’s absolutely amazing,” she said after Edward and Vincent crossed the finish line.

Despite the smiles and cheers seen on Sunday, Jason Pardy says that the journey was not always smooth.

“My oldest was kind of on board with it the whole time. My youngest was wondering why we had to do this and kind of complaining,” he said. “It’s not like they were totally on board with it right from the get-go. Sometimes it was a hard sell, especially on the hot summer days.”

The Pardys were able to raise $500 for Hands, which Jason says will be matched by the Ontario Power Workers Union.

Jason says that he hopes that his boys have taken some lessons out of their summer adventure.

“I think it’s about teaching them to set goals, and also the whole cause part of it too. Getting them involved in the community so it makes them better people when they grow up,” he finished.